This recap of Apple TV+’s Truth Be Told season 2, episode 8, “The Untold Story,” contains spoilers. Welcome to another episode of Truth Be Told. I’ll be honest, I cannot wait for this to be over. 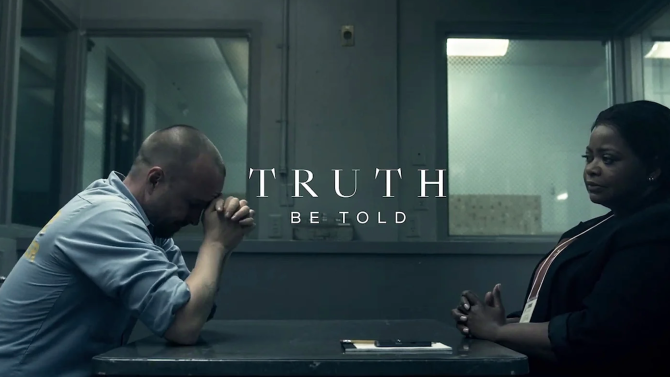 Episode 8 begins with Rose in the ICU — her condition is serious after being shot by Holt. Poppy talks about Rose’s talent on the podcast and wonders why no one recognized her and became invisible. She says Micah stole her voice. After the recording, Poppy wants to meet Holt in jail.

As for Micah, she’s still conjuring a warpath and is considering a cease and desist against Poppy’s podcast. Ivy warns her about optics and the board. Meanwhile, Poppy meets Detective Aames, and he’s buckling under pressure on the investigation due to the perception of working with her.

Poppy attends a mediation for the lawsuit against her by Alana Cave. The judge agrees to take the discovery phase to deposition. Afterward, Poppy tries to plead with Alana, but she tells the podcaster that she has not changed. Poppy soon learns that Micah introduced the hotshot lawyer to Alana to help her. When Poppy rings, Micah, her ex-best friend, tells her it’s all about survival. Micah is insistent that she wants to find out who Josh’s killer is.

As for a recovering Markus, he is aggrieved for being shot by an officer in the last episode. He tells Aames that he’s going to sue the cop. Aames advises against it as he’s a former cop. Markus does not take the advice and holds a press conference, stating he will make the cop accountable. There’s plenty of side stories now!

Due to help from Aames, Poppy has access to Rose, who is now awake in the hospital. Rose tells Poppy that Josh promised that Micah would tell everyone the truth at her party and admit what she did, but it never happened, and instead, she was escorted away by security. Rose felt betrayed by Josh. Micah enters the hospital room, and she tells Rose that she wants to help people, but Rose tells her she will never forget what she did. Micah then visits Holt in prison, and she tells him not to say anything as she needs him. If Micah is Josh’s killer at the end of this, it will be annoying and shoddy writing.

ALSO READ >>  How To Produce A Movie In Nigeria

Poppy visits Holt in prison, and she demands that he talks. Holt says everything he did was his choice, and no one put him up to it. He confesses to killing Josh because he had to step in. He claims that Josh got jealous as the woman he was married to was more successful. Poppy has a suspicion that Holt is confessing to cover Micah’s back.

As the episode draws closer to an end, Poppy admits on the podcast that when she was younger, Micah was there on her most horrifying day. She reveals her foster mother died because of her. She fell into the lake, and she could not swim. The young Poppy froze because she was too scared and traumatized to save her — she’s carried this guilt her own life. Poppy is revealing her darkest story, so Micah cannot use it against her.

Poppy then angles back at Micah and reveals Holt confessed to the murder of Josh to save Micah, but she does not believe it will save her. She wonders if Josh is being saved. It’s an emotional recording, but after, Aames rings her and tells Poppy that Holt lied and did not kill Josh.

What did you think of Truth Be Told season 2, episode 8? Comment below.