This article discusses the ending of the Netflix film The Summit of the Gods and will contain spoilers.

Netflix film The Summit of the Gods ends with a cryptic question: “Why ever climb higher? To be the first? Why to risk death? Why do something so futile?”. Well, the film answers that but even that is more cryptic. 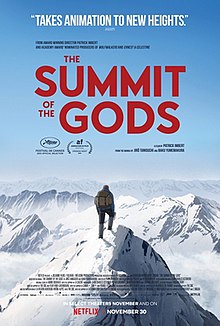 [Movie] The Summit of the Gods

Netflix film The Summit of the Gods ending explained

In the end, everything was all set in place. Habu got his catharsis by summiting Everest even at the cost of his life; Fukamachi got Mallory’s camera and came to know the mystery surrounding that expedition. But even though everything got resolved, there is a void felt somewhere. With that void in our hearts, the last scene takes us again to the mountains. This time to follow Fukamachi. There he ranted the aforementioned question. Well, he knew the answer well as he stated, “I know why. There doesn’t have to be a reason. For some, mountains aren’t a goal, but a path. And the summit, a step. Once there, all that’s left is to keep going.”

Yes. There doesn’t have to be a reason to climb a mountain or anything someone wants to do in life. There’s more to it. For Habu or Fukamachi or anybody, it doesn’t matter when you are doing something and you realize that you can’t live without it. And any tragedy, any breakdown, any loss can’t force you to stop what you are trying to do.

For Habu, he got a taste of mountaineering at a young age, when he climbed a hill and saw a beautiful sunset. For him, it was ‘the moment’ when he realized that it didn’t matter to him anything but to climb. It didn’t matter for him how someone felt when he loquaciously told his techniques in front of friends quite braggingly or arrogantly sharing his point of view of saving himself solely in the situation when his partner was swinging unconsciously at the end of a rope — because it is no point of dying both.

But this unbending attitude of determination to climb, Habu was not being inhuman in that process. He had the vulnerability too. That’s why he couldn’t cut the rope when Buntaro (a rookie climber) hung on the other end of the rope while mountaineering together. While Buntaro himself cut the rope obeying Habu’s past statement of saving one than dying two, Habu got shattered. Also, he questioned his never-bow-down domineer after a horrible accident. On the boundary of life and death, he asked for help relentlessly to survive like a loser.

Despite having these tragedies and losses, he went to the mountains again. He was not the cold-hearted guy, suffering from ‘Obsessive Compulsive Disorder’ to go to the mountains. He sent money to Buntaro’s surviving sister, and saved Fukamachi from death. According to me, he was more human than anybody. But for him to get away from mountains was more painful. And the summit wasn’t just something he wanted to achieve for being famous, but a place to look downward from and introspect all that’s he left behind.

Fukamachi understood it. Thus despite knowing the mystery of George Mallory, he didn’t disclose that to us lest it shadowed the main thing, a joy to climb, behind all the fame and history-making. I do not have a conclusive answer though about Fukamachi’s last climb towards the summit in the last scene. I asked this question several times after watching the movie. All I have to get is ambiguity. Perhaps, that is the point. There doesn’t have to be a reason. It is important to follow the path, where you can discover yourself. And once you get the taste of it, you can’t stop.