This review of the Netflix film The Power of the Dog does not contain spoilers.

The Power of the Dog is a gorgeous-looking western from famed director Jane Campion, who has been living off being the first female to win the revered Palme d’Or at the Cannes Film Festival for The Piano, being the second out of seven women nominated for Best Director for that 1993 film (the first being Lina Wertmüller in 1977 for Seven Beauties). She takes the 1967 source material of the same name from Thomas Savage that’s an engrossing character study on societal oppression, and layers the film with the duality of intolerance, sexual orientation, and male toxicity. 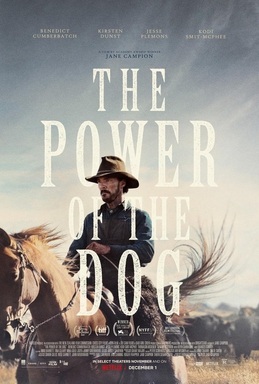 [Movie] The Power of the Dog

Campion’s adaptation tells the story of Phil Burbank (Benedict Cumberbatch), a cattle driver who owns a ranch with his brother, George (Jesse Plemons). George is kind-hearted, warm, and has a capacity of empathy for people that Phil doesn’t have. Not that Phil wants that skill in his leadership tool belt. He is a portrait of male toxicity who happened to graduate from Yale. So, when he sees his brother take a liking to a local inn owner, Rose (a magnificent Kirsten Dunst), he sees that as a threat to his way of life.

At that time, was it wrong to be cruel and domineering as Phil was? No. There was no such thing as a hostile work environment. Almost everyone respects Phil’s competence and knowledge when it comes to their profession (he is so intuitive, he knows when not to wear gloves for risk of an Anthrax poisoning). But Phil takes his bullying to another level. He starts to torment her psychologically. He finds her weak spot, alcoholism, and shyness, which her brother George forces her to perform on the piano as if she’s a dancing monkey. He strangely keeps showing her off to overcompensate his love and admiration for her.

Soon, Phil turns his attention to Rose’s son, Peter. He berates him for being effeminate and having a lisp. Also, for his choice in flashy clothes, selection of hobbies (he creates roses out of paper), and loves to dissect animals so he can get a head start on his education on being a doctor (one would think we could have cured cancer by now if television weren’t invented that now raises our children). He is more resilient and comfortable in his skin than his sister. What happens next is a chess match of who will force who to realize who the alpha male is.

Campion’s adaption expertly captures not only the novel’s themes but a layered look at the duality of intolerance, sexual orientation, and societal oppression. At the time of its original publication, it was ahead of its time. The themes and twist it put on the modern western, not to mention a book published in a country known for its overt masculinity, was ahead of its time. Yet, not by today’s standard. That’s why Campion’s shifting the story to the screen is remarkably flawless, and the setup builds. It’s a notable work in the way the source material is presented nearly fifty years later, that somehow she made feel fresh and shocking at the same time.

While Plemmons remains Hollywood’s secret weapon and Dunst deserves an Oscar nomination with her best performance since Melancholia, it’s Cumberbatch’s Phil and Smit-McPhee’s Peter’s interaction that gives The Power of the Dog its juice (the much talked about mentoring of Phil’s maturation from Bronco Henry is critical here). A fascinating character study on how societal oppression has the unintended consequence of turning the marginalized into oppressors. And for that matter, the oppressed into the aggressors. For example, look at the duality of these two drawn characters. Masculine acts are not solely heterosexual as much as murderous acts are not.

The duality of man is much more complex when applied to such weighted themes as intolerance, sexual orientation, and male toxicity. Very rarely is someone born cruel. Many times prejudice is born out of someone being oppressed. And sexual orientation has nothing to do with gender roles or abilities. While the ending is underplayed and possibly less effective considering the time it was written, The Power of the Dog explores this concept with striking results and a rousing visual narrative.

What did you think of the Netflix film The Power of the Dog? Comment below.