This recap of Apple TV+s The Morning Show season 2, episode 4, “Kill the Fatted Calf,” contains spoilers. Another week and another edition of The Morning Show is trying to reel the viewers in with new complexities. The question is — has UBA changed? Or have they moved the goalposts to hide the ugliness? 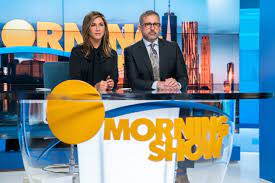 Episode 4 opens with the Foo Fighters performing at the studio. It’s a “welcome back” celebration for Alex – she’s trending. This is a success, just like Cory wanted. Everything is going so smoothly that Chip tells Alex to relax. But there’s no resting in this world. You always need to keep two steps ahead.

As for Bradley, she continues to enjoy her romance with Laura Peterson. She reveals to Laura that Cory was secretly fired, so they got close as friends. She claims that Fred was fired after she unloaded on the board, and Cory was asked to return as CEO. Laura drops a bombshell — that the UBA is thinking of replacing Cory. This relationship between Bradley and Laura could turn dangerous.

In Italy, Mitch decides to help Paola with her documentary and preps her for the interview she’s taking. Paola admits she is not used to people helping her, so thanks him. Mitch calls Cory and tells him that someone has launched a smear campaign against Hannah, and it must be Fred. He tells Cory to cut off the root and “do the right thing.” Both men end up arguing, but Mitch leaves it on the last word — he reminds Cory that he is the CEO and tells him to handle it.

With Daniel questioning UBA’s use of black voices, Mia asks Stella about Daniel doing the election debate — this is a sought-after role that Alex does not want. Stell Tells Mia that Daniel has reached his level of charisma. When Daniel finds out about this, he’s frustrated. And so, Stella speaks to Alex about the debate and raises how she will bring quality. Alex is hesitant and thinks there are other people at UBA that have more to prove. She doesn’t think Stella “gets it.”

With their friendship in tatters, Bradley visits Cory and tells him that she recognizes that their relationship has suffered. However, Cory thinks she’s only seeing him so she can get the election debate. Bradley firmly claims that she cares about their friendship and understands that he cannot cater to her needs 24/7 as the CEO — she apologizes. Cory reminds Bradley that he’s on her side as he’s too old to have enemies. The pair hug it out.

But this leads to a personal crisis for Bradley — she updates Laura about making up with Cory and references how having “two straight women” on the election debate is unnecessary. Laura is confused about why Bradley called herself “straight,” but Bradley does not like defining things. Laura resents Bradley for not embracing her sexual fluidity and using her identity because when she navigated her career growing up, she was fired for being gay. Laura knows the world has changed, and she’s disappointed Bradley would hide. She thinks Bradley is repressed and delusional. Bradley is furious at the accusation, and the two women argue intensely, leading Bradley to smash one of Laura’s vases.

And tensions are high between Stella and Cory, too — Stella questions why she was hired and wonders if it was for diversity. Cory tells her that “talent is talent” and not to underestimate him — she wants her to sort out the Alex and the election debate issue. Stella suggests she is being used as an Asian woman and puts the phone down. Afterward, Daniel decides to spontaneously sing on The Morning Show, much to the shock of the production crew, who are powerless. Mia asks Daniel why he did that.

Bradley continues to struggle and speaks to Stella about the election debate and states she can offer perspective. It looks like she’s about to reveal her sexual identity, but instead, she falters and reveals she is from a southern Conservative family, so she may be able to add an angle. Stella is not amused and speaks to Alex. She tells Alex that she wants things to change, which includes starting afresh. She explains to Alex that she came from the rotten mess, and the result is the present day. Stella is persuasive, telling Alex to do the debate because she owes a connection to the women of the country, as she means something as a leader and a feminist — Alex agrees to do it.

Paola reveals to Mitch that the documentary producer got the coronavirus — she says they will need to quarantine and that it will be lonely — she asks him if he’d like to continue working on the documentary with her.

As for Bradley, she shows up at Laura’s place and hugs her with desperation — she does not want to lose her.

Finally, a desperate Cory asks Cybil for help — he tells her that Fred is spreading nasty news about Hannah in the press, and he wants her to speak to Fred as a friend. Cybil reveals she isn’t Fred’s friend and reminds him that this is business, not a morality play. She questions why Cory would not contact Fred himself and feels that Fred recommended him for a reason. Cory receives a brutal dressing down here. Are his days numbered?

What did you think of The Morning Show season 2, episode 4? Comment below.