This review of the Netflix film Pokémon the Movie: Secrets of the Jungle does not contain any spoilers.

Netflix’s new animation film Pokémon the Movie: Secrets of the Jungle takes me to childhood again. The global phenomenon of Ash and Pikachu got me at an early age but over time as it happens faded away from me. But after seeing this film, the child within me is reborn with these characters. But apart from this childhood nostalgia, independently this film has its uniqueness of having a relevant social message above all. 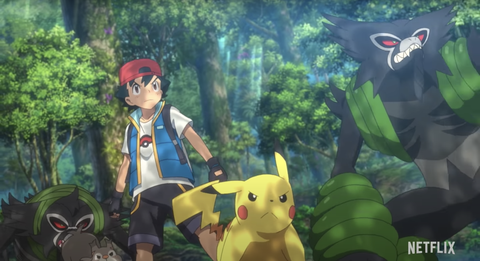 The main theme of man vs nature is depicted with the beauty that lingers with you after the film ends. But over that, it is a very emotional story of friendship, parenting, and love. It spreads the message of everything that matters in the world, no one is wasted is so fascinating that it makes a film filled with joy and social importance.

I love the way it presents the wrong deeds of humans towards the forest and nature. In the film, it is shown that a team of researchers come to the forest to research with the river water only to aim to find the healing stream from the heart tree to use it for their profit. The character of Dr. Zed is depicted here as a sinister scientist, who will go further to achieve his ultimate goal, even crush everything in his way.

That signifies the human’s unnecessary outrage against nature. How we fulfill our needs by extracting nature excessively, where it is all needed to have the balance between the human and the nature, is just beautifully shown by the characters of Koko, Ash, and the other good scientists by their fight against this destruction.

In the end, with the childhood nostalgia Pokémon the Movie: Secrets of the Jungle reveals the values of nature and its everlasting impact on everything. And Ash and Pikachu’s journey takes us to the ancient roots of our world to understand its true value.

What did you think of the Netflix film Pokémon the Movie: Secrets of the Jungle? Comment below.