Over two truckloads of Fulani herdsmen armed with AK-47s have arrived in Igoba Community in the Akure North Local Government Area of Ondo State. 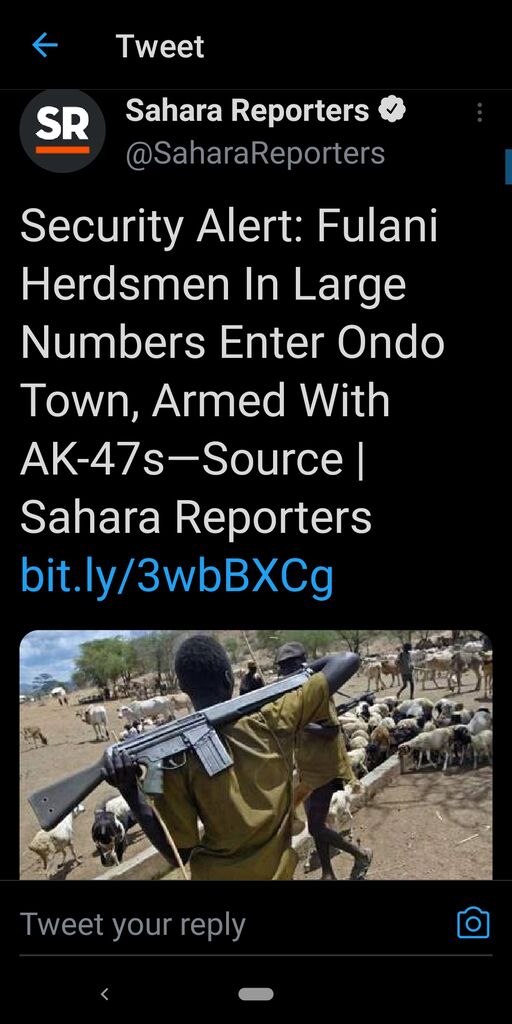 A source, who spoke with SaharaReporters on condition of anonymity, said the two truckloads of herdsmen entered the town in the wee hours of Thursday.

He also alleged that they were all armed with AK-47 rifles, arriving at the remote part of the town which is basically surrounded by bushes.

He said, “This morning around 3 am, two trailers filled with a troop of Fulani men armed with AK-47s entered the town.

“Aside from that, early this morning, in another part of Akure, at Oja Oba market, the Fulani herdsmen attacked some women. The Fulani herdsmen were in Army uniforms but they are not soldiers, they struck some with knives, they injured people but they didn’t stay for long, they did what they wanted to do and left.

“Please, we want the government to come to our aid, the security agencies should also rise to their duties. People should not die for nothing.”

SaharaReporters earlier reported how residents of Adeoye, Akinrimisi and Ajaye in Ondo Town, Ondo State expressed fear as they had observed Fulani herdsmen in their numbers invading their areas with weapons and setting up hideouts for an imminent attack.

SaharaReporters learnt that the Fulani herdsmen attacked one of the areas on Monday night up till Tuesday morning, in a “test-run” as residents lamented that the police and the soldiers deployed in their area only extort money from motorists and turn their backs on the attackers.