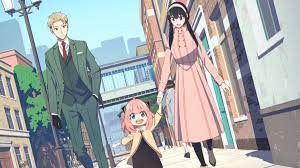 Episode 18 of Spy X Family begins with Henderson announcing to the students that their midterm examinations will start in a week. He confirms that there are four subjects. Students who pass will receive Stella Stars, while those that fail will receive Tonitrus Bolts.

Henderson hands the students their history exams one by one. Anya learns she didn’t do well as Henderson informs her that she will receive a supplementary lesson after school. Damian taunts Anya with his score. Later that day, Anya devises a scheme to read Damian’s mind during history exams to obtain excellent scores. Henderson punishes Anya with an extra assignment because she’s laughing during the additional lesson.

Her mind-reading ability disappears on the day the moon goes away. She realizes this event will occur when the exams begin, so she can’t cheat on the tests. Anya asks Bond to peer into the future to give her the test answers, but he only gives her a vision of what they’ll eat tonight. The following day, Loid helps Anya study for her exams since he’ll be taking time off from work.

Loid examines Anya’s situation in his head. He’s given up on Anya obtaining four Stella from the exam. He focuses more on raising Anya’s academic knowledge so that he can get into social gatherings. This allows Loid to get into personal contact with Desmond. During their session, Yor informs Loid that she asked Yuri to stop by to serve as Anya’s tutor for the exams.

Yuri arrives. Anya introduces herself to Yuri, who isn’t pleased to meet her because she’s Loid’s kid. As they sit together in the living room, Loid ponders if Yuri realized he dressed up as the Foreign Minister. At the same time, Yuri wonders if Loid’s mocking him for delaying the summit. Anya’s excited to see their inner banter, but Loid announces he’ll go shopping. He’s realistically going to depart on another mission.

Yuri and Anya begin their study session. Yuri’s not thrilled because he doesn’t like how Anya receives love from Yor. He plans to throw hard questions at her to show her how authoritarian society can be. Anya secretly reads his mind to get all the questions right. However, she realizes she needs to take this session seriously because the moon will neutralize her powers.

Anya promises to try harder and tells Yuri that if she can become an imperial scholar, she will help Yor out with luxuries. This remark confuses Yuri. However, he plans to help Anya, hoping Yor will appreciate his efforts. Anya doesn’t show much growth, leading Yuri to ask her if she likes studying. Anya informs him that she doesn’t.

This results in Yuri explaining his qualms with studying as a child. He tells Anya that he utilized his drive to want to assist Yor as his motivation to study harder. He focused on multiple studies, from Language to Physics, hoping to grant his sister a better life. Yuri gives Anya a motivational speech to inspire her. Unfortunately, after another failed attempt, Yuri calls it quits.

Before he leaves, he grabs some of Yor’s snacks and then departs. Anya downplays her assistance in Loid’s mission involving the minister and heads into her room to study. Loid returns and learns that Yuri was teaching her subjects that wouldn’t be on her midterms and is upset. The first set piece concludes with a two-week time-skip, showing the students take their exams

The next segment, “Daybreak,” begins with some professionals gossiping about the first graders’ tests. One of the gentlemen exclaims that their test results didn’t look too impressive and wonders if the questions were too challenging. Someone mentions that the parents may try buying their children’s grades up, but another tells him that the principal won’t allow it. He wants the well-deserved students at the top, not cheaters.

Since the answer sheets held high value, the men had to lock them away in a safe. Meanwhile, Loid sits atop one of the school’s roofs. He plans to infiltrate the safe room and forge Anya’s test results to prevent her expulsion via Tonitrus Bolts. He’s only worried about the school’s security near the safe. While disguised as a teacher, he plans to carefully infiltrate the room and leave no evidence.

Suddenly, Loid spies a suspicious man, who the audience learns is named Daybreak, an elite spy for an elite organization. Daybreak must alter a specific student’s answer sheet. Daybreak created his name as a way of opposing Loid’s alias Twilight. Daybreak performs creative stunts and manages to swing by the guards, shocking Loid. Daybreak enters the facility nonchalantly and causes a nearby statue to tumble.

The guard protecting the room notices him. He informs Daybreak that he can’t enter this area without an I.D. Loid saves Daybreak by telling the guard he dropped his I.D. Luckily, Loid kept a backup I.D. for every subject. Loid notices Daybreak has written notes from his mission on his hand, confirming his earlier suspicion. Loid sees that the student numbers Daybreak wrote on his hand belong to the Desmond brothers.

At the safe, Daybreak forgets the passcode. He tells Loid that he needs to use the restroom before Loid enters the safe room; Daybreak jets behind him and knocks him out. While Daybreak searches for his assigned students’ files, Loid monitors him. He pretended to look unconscious because he felt it would be safe to carry out his task after Daybreak completed his.

Daybreak opens the safe and reveals Damian’s father was his employer. He boasts about his success loudly, worrying Loid. Daybreak’s saddened that no one will know who he is. He decides to leave an autograph behind, shocking Loid. Daybreak tells him he better reveal how excellent a spy he is to his colleagues. Daybreak rolls out, allowing Loid to check what he left behind.

Loid notices that Daybreak altered the Desmond brothers’ grades into failing grades. He ponders if Daybreak’s client is a business rival or enemy of Desmond’s. Loid re-alters their grades because it’d threaten Operation Strix if they got expelled. Loid recounts how intelligent both brothers are and eventually finds Anya’s test sheet.

Five days later, all the students visit the courtyard to look at their results. One of Damian’s friends informs him that he placed second in their grade, granting him his first Stella. Becky received 46th place. Damian’s friends scold Anya and recommend that she check the bottom of the list. Anya learns she placed in 213th place, granting her a passing grade. At home, Anya tells Loid she worked hard on her tests.

Loid asks her how she can be so proud of herself when she barely avoids failing all of them. Anya reads Loid’s mind. He plans to crank up Anya’s studying habits before her next midterms. Loid confirms that Anya managed to pass her exams without him needing to alter her results. He’s somewhat proud of her for doing her best. The episode concludes with Daybreak receiving word that he failed his mission and gets terminated.

Spy x Family episode 18 offered some fun dynamics and mischief for fans to delve into this week. It sheds light on some details concerning Anya’s past while introducing new characters and moving the story forward. Despite some situations feeling contrived, this episode brought some exciting elements into the mix. The whole dynamic between Yuri and Anya played out differently than anticipated, which was great.

Many fans will find Yuri’s interactions with Anya hilarious, as it shows he might be warming up to Loid’s side of the family. At the same time, Yuri left quite an impression on Anya despite him teaching her subjects that wouldn’t be on the midterm. Yuri’s infatuation with his sister does feel strange and awkward at times. I addressed it in the part one episode discussions; unfortunately, this same instance crops up here.

While the romantic angle is slightly bothersome, Yuri doesn’t dwell on it too much, as he’s more focused on motivating Anya and impressing Yor. Daybreak’s character provides an intriguing contrast to Loid’s character. While Loid’s more collected, Daybreak feels goofier and naïve. His character gave off strong Arsene Lupin III vibes, which I adore.

His inclusion spells more doom and stakes for Loid, which is excellent. Overall, this chapter had some fun points that appeal to most audiences. From Damian earning a Stella star to Daybreak’s introduction, Spy x Family seems to be setting up some exciting developments. Let’s hope this second part can continue building steam by introducing more stakes or outcomes for our cast.