Tiffany Trump And Her Nigerian-Bred Lover Get Married In Florida 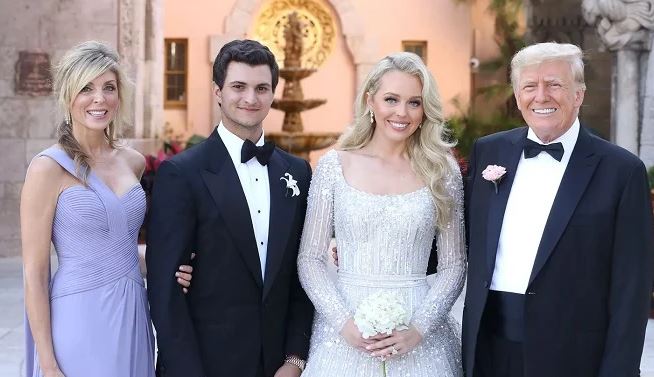 Former US president, Donald Trump’s daughter, and Michael Boulos, her Nigerian-bred fiance, have tied the knot.
According to People, the pair got married on Saturday at Mar-a-Lago Club, a resort in Palm Beach, Florida in the United States.
Trump welcomed Tiffany with Marla Maples, the actress, who he married in 1993. They, however, parted ways in 1999.
Speaking with the media outlet, Maples said the wedding venue was selected because “this was Tiffany’s childhood home and where she was brought into the world”.
“We are focused on this sacred union and welcoming beloved friends and family, not on politics.”

Paul Adefarasin, the senior pastor of House on the Rock Church, and Cobhams Asuquo, the singer, were among the top figures who graced the pre-wedding event in Florida.
In an Instagram post, Adefarasin shared photos from the event. He also prayed for the success of the union.

The lovebirds got engaged on January 19, 2021, at the White House rose garden — a few hours to the end of Trump’s tenure as US president.
It is understood that Tiffany, who is Trump’s fourth child, and Boulos have been dating since 2018.
Boulos is a Nigerian-Lebanese. It is understood that he was born in Lebanon and grew up in Lagos where he moved into with his parents at a young age.
The business executive graduated from the American International School of Lagos before moving to London where he got a degree in global business management from Regent’s University in 2018.
He also bagged a master’s degree in project management, finance and risk at the University of London in 2019.
Massad, his father, is the chief executive officer of SCOA Nigeria. He has been the associate director since 2016.
Sarah, his mother, is the founder of the Society for the Performing Arts in Nigeria.