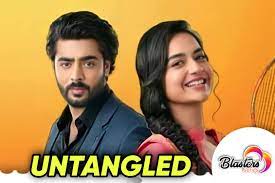 Meera rushes to Diya and asks Mohan to not raise hand on her. Mohan says I gave her too much freedom. Diya says you taught me to never lose our honor. I am very happy to play and win for you today. Mohan says if you had cared for my respect then you would have been here. Diya says Mounika had locked me in a room that’s why I got late. Mohan shouts to stop lying now. Diya cries and says I am not lying. A good man took me out of that room.

Arjun is driving home and sees his cracked mirror. He recalls meeting Diya today. How Mohan took her away. He calls the tournament venue and asks if he can get the winner’s address? I am from the press. The receptionist gives him Diya’s address. Arjun tries locating her address on Google maps and says I have to give back her cycle.

Meera asks Diya if she is fine? Mohan says don’t listen to her, I don’t trust her anymore, she doesn’t care about my upbringing. The guests were questioning my upbringing and it brought so much shame to me. Diya cries and says I didn’t know you would have to bear so much shame because of me, I am sorry. Mohan says you knew the groom’s family would be here. I would end this madness today. He takes her badminton equipment and breaks everything. Diya tries to stop him but he burns the racket. Diya cries seeing that.

Mohan’s manager comes to his house. Mohan asks if everything is fine? The manager says your boss has called you right now. Mohan is worried. Meera says why would he have called you? Mohan says your daughter insulted his daughter. Diya thinks I won’t let him lose respect in this fight. She says I will come with you. Mohan says you have done enough, don’t step out of this house. He leaves. Diya says I can’t leave him alone. Meera tries to stop her but Diya pushes her aside and leaves.

Arjun is looking around for Diya’s house.

Mohan comes to his boss’s house. Mounika is hurt. Diya arrives there too. All glares at her. Mohan whispers at her to leave. Mounika attacks her and says how dare you beat me? Mohan’s boss glares at him and says you came to me 19 years ago looking for a job and I took you in. Mohan says I am always thankful for that. Mounika’s father Rajkumar says it’s good to see that your daughter won today but you know I can’t let my head down. Mohan says it was Diya’s fault, she will give the trophy to Mounika. Rajkumar says it won’t bring back my daughter’s honor. Diya says I didn’t do anything wrong, I won because I was better than her. Rajkumar tells Mohan that you gave education to her but she doesn’t know her limits and standard. Diya says I am sorry if you felt bad but if I am better than Mounika then how is it my fault? Mohan says I am sorry, I will get her married and this all will end. Rajkumar says you should take care of your daughter, I am firing you right now. Mohan is stunned. Rajkumar ask Mohan to leave the house that company gave him, you have to leave the city today only. Mohan begs him. Diya says I am pleading you to not punish him because of me. Rajkumar says now you understand your limits? Mohan falls down to his knees and begs him. Mounika smirks at Diya. Rajkumar asks his manager to do the job and leaves. Mohan breakdowns.

Arjun’s car breakdowns on the road. He tries to repair it. Mohan and Diya pass by his car on the road but they don’t see him. Another car is about to hit Mohan but Diya saves him. Mohan faints there. Diya cries for help so Arjun brings water to her. She is surprised to see him. Mohan wakes up. Arjun says I will take you both to the hospital. Mohan says I am fine. Arjun says Diya forgot her cycle in my car after her match. I dropped her to the venue. Diya says this man saved me from the locked room. Arjun says I can drop you both home. Diya says we will go home ourselves. Arjun says it’s late night so I can drop you. Mohan tries to walk but he is dizzy so Arjun scolds Diya. He makes Mohan sit in his car. Diya stares at him and sits in the car.

Tina thanks her father for new designer dresses. She says I really like Arjun. He says I will get you married to him, he leaves from there. Tina’s friend says why do you want Arjun? He is short-tempered and unpredictable. Tina tells her friends that Arjun is my adventure and my passion so I will win him over.

Arjun brings Diya and Mohan home. Meera rushes to him and asks if he is fine? Mohan says your daughter’s badminton destroyed our lives. He thanks Arjun and goes in the house with his family. Diya thanks Arjun for the help. He gives her cycle. Diya starts going in the house but Arjun says you won’t get anything from this game, it’s money that wins and not the talent. Forget badminton otherwise it will destroy you also. Diya looks on.

Amitabh tells his wife Madhuri that we all want Arjun to come on the right track, he will do that once he is married. Madhuri says Arjun can get angry tomorrow in front of everyone if we announce the wedding. He says Arjun loves you the most and he won’t deny you. Tina can handle him. Just convince Arjun for tomorrow. Madhuri says fine, I will try to talk to him. He thanks her and leaves.

Diya comes to her room and cries. She recalls moments with her family. She lies on her bed and weeps. Diya says who can tell baba that I didn’t do anything wrong.

Mohan packs the bags. Meera asks him to rest. Mohan says we have to leave tonight only. Meera says can’t we stay till the morning? Mohan says it’s boss’s order so we can’t stay longer.
Diya looks at her racket and says I won today but I lost everything. I lost my father’s trust and he lost his job because of me. She wipes her tears and says it’s fine. I might have lost today but it’s not the end. Meera comes there and says it’s time to leave. Diya asks if you think I was wrong? Meera says neither you nor Mohan is wrong. You tried to raise your voice up for your father’s honor and he tried to bow down his head for your future. The only thing wrong was you leaving the house today, if you hand’t done that then this all wouldn’t have happened. Diya comes out of the room. Mohan says let’s go. Diya cries looking at their house. She asks Meera if we leave then what about my school and my friends? Mohan glares at her. Diya cries.

In the morning, Diya’s family arrives in a new city Kolkata. Mohan thinks why did Diya do it? She has broken me. Diya thinks I will become my father’s strength. Diya sees Karan Mathur’s poster which says he will be in the city tomorrow. She thinks I have a chance to meet him again. I can ask for a job, he praised me also. Thank you God.

Niharika shows the cake to her husband. She says I made this cake. He shows her the bakery card and asks her to hide it. She says don’t tell anyone about it. Amitabh comes there. They wish him birthday. Niharika gives him the cake. He asks Madhuri when is Arjun coming? She says soon. Tina comes there and wishes Amithabh birtyday. Madhuri says we should wait for Arjun to come before he cuts the cake. Everyone wishes Amitabh birthday. Niharika says let’s cut the cake. Amitabh is about to cut the cake but Arjun enters the house and sings happy birthday.. he is drunk and barefoot. All look on. Arjun says happy birthday Mr. Agarwal.

Madhuri rushes to Arjun and says I was worried for you. Arjun says I can see everyone being worried for me. Amitabh says my son is here so we will celebrate now. Deepika says it will be fun now. Amitabh says Arjun will take the first bite of the cake. Arjun stands beside him as he cuts the cake. Amitabh offers cake to Arjun but he stops him. All look on.

Mohan and Diya’s family arrive in a small society. Mohan’s brother and his family comes to meet them. Diya’s aunt Rama is angry seeing them. Diya greets her aunt but she angrily leaves. Mohan looks on.

Arjun tells his father that I am a stranger in all this celebration. You are a stranger to me so I can’t enjoy your happiness, it’s your birthday, your cake so eat as much as you want. He starts going to his room. Madhuri tries to stop him but he leaves.

Rama tells Mohan that you had a good job and a house there but this Diya destroyed everything. Mohan’s brother asks her to stop it, he asks his daughter Shobha to help them. Mohan’s family goes to settle down. Rama taunts her husband that they are here when they have nothing left. Diya hears that.

Arjun comes to his room and looks at himself in the mirror. He recalls how he tried to convince Amitabh that he didn’t take any drugs, badminton is his life. Amitabh shouted that he was blamed for drugs so I can’t get his case reopened as it will bring disrespect to my family, he has to leave badminton. Arjun begged him to help him, badminton is his life. The flashback ends. Arjun starts drinking alcohol and recalls the incident.

Scene 2
Arjun is murmuring in a drunk state. Madhuri tends to him and says the most difficult fight is against the family, just end it and start a new life. I don’t like to see you in this state. I think Tina can help you start a new life, she will take care of you. You will say yes to her in the party right? Arjun is drunk and murmurs a yes. Madhuri says everything will be fine. She puts him in the bed and sadly leaves.

Mohan tells his brother that I am not worried about the job, I will find it soon. I am worried about Diya. Diya comes there and hears it. Mohan says I want Diya to get married soon. I am scared after what happened yesterday. What if anything happens to me? His brother says we can talk to Sadna, she has many proposals. Shobha says I am taking Diya to the market as she needs some items. Meera asks Diya to come back fast. Diya is guilty for lying but leaves with Shobha.

Diya and Shobha are going to the badminton center. Shobha goes to buy a water bottle. Diya sees an old woman coming out of the building, she is about to fall down but Diya rushes to her saves her in time. Shobha brings water. Diya asks the woman who is Arjun’s dadi if she is fine? Dadi looks at her and says I am fine. it’s my son’s birthday so I have to go now. Thank you for saving me.