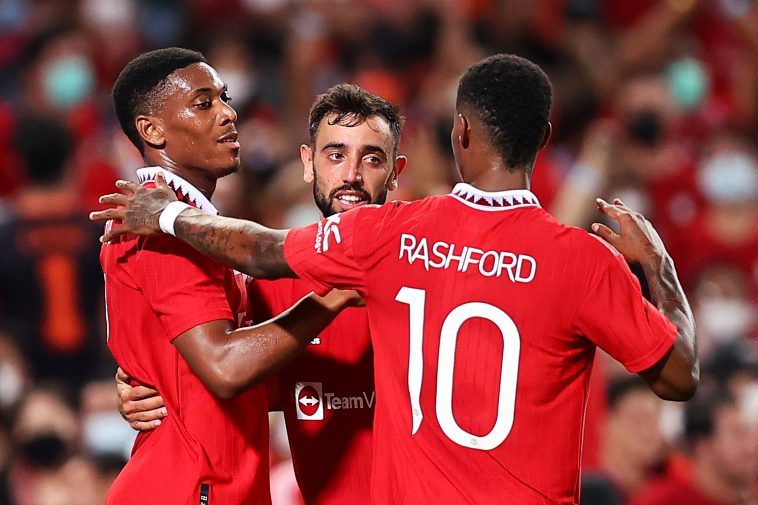 Manchester United have left out four first-team stars from the squad set to visit Moldova to face Sheriff Tiraspol in the Europa League. Marcus Rashford, Anthony Martial, Donny van de Beek and Aaron Wan-Bissaka are set to miss the tie, via Metro.

The four players missed training at Carrington on Wednesday. Luke Shaw has returned to the squad after being on the sidelines in previous fixtures.

United faced a setback in the first group game of the UEL campaign. The Red Devils lost against Real Sociedad 1-0. La Real were awarded a controversial penalty that saw them get over the line.

Erik ten Hag rotated the starting lineup against the Spanish opposition. Before the La Liga outfit’s visit to Old Trafford, United had gone on a four-game winning run in the Premier League.

After a disappointing start to the 2022/23 campaign, the gaffer decided to drop the likes of Harry Maguire and Cristiano Ronaldo to the bench. And the decision paid off as the Red Devils beat the likes of Liverpool and Arsenal.

Rashford has been pivotal in that run. The 24-year-old has contributed with some important goals for the team. The England international seems to have returned to his best under the Dutch manager.

Martial, on the other hand, has been on the sidelines for most of the season. The 26-year-old has featured in just one game this campaign. Van de Beek has also not seen a lot of action under his previous boss.

Wan-Bissaka has found himself on the bench since Ole Gunnar Solskjaer’s departure. Ten Hag has preferred other options in place of the 24-year-old.

The game against Sheriff is an important one. It is the final fixture before the international break starts. Hopefully, United are able to get over the line and get a positive result back to Manchester.