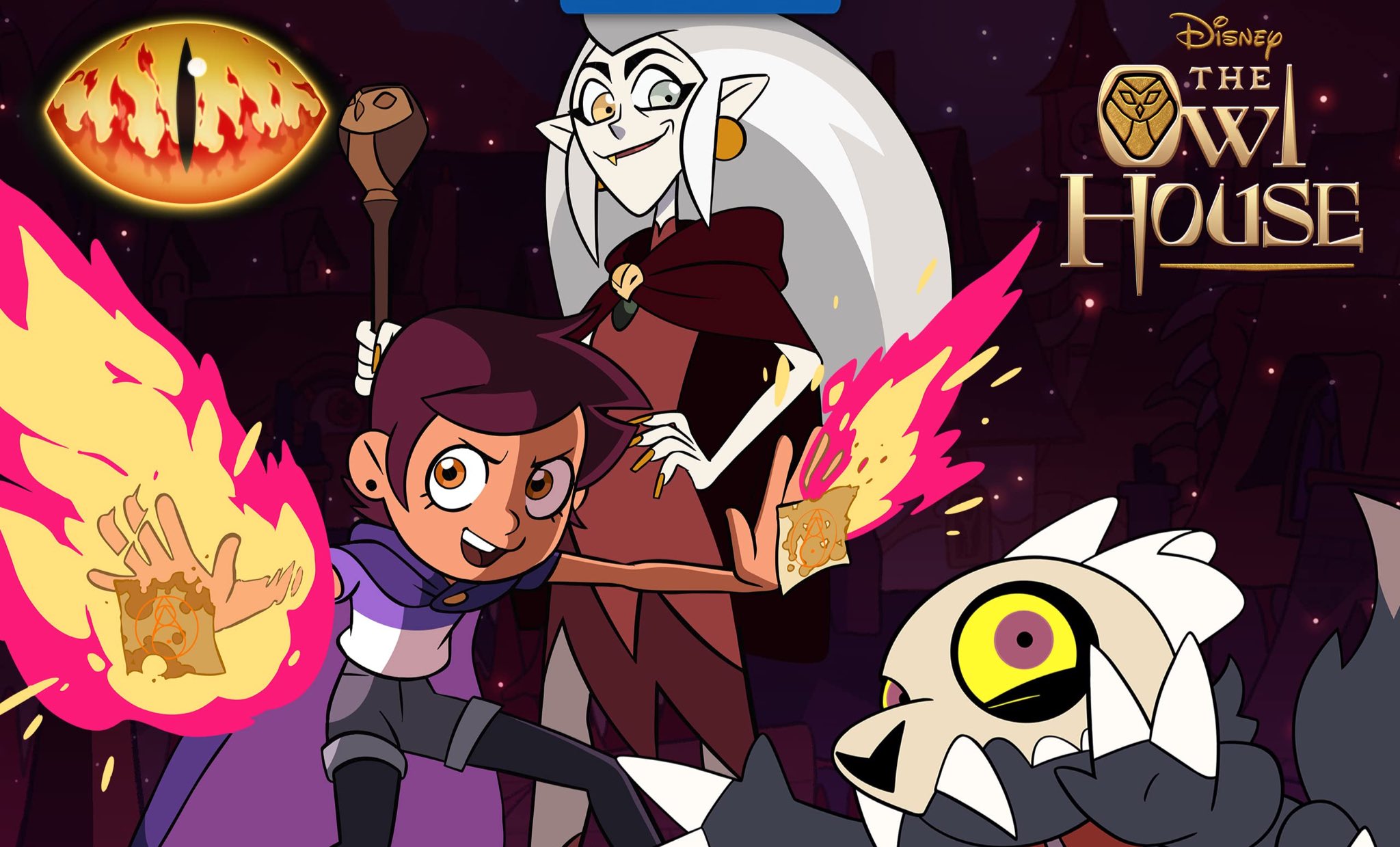 In The Owl House Season 3 Episode 1, Luz, Amity, Hunter, Willow, and Gus are pulled through a portal into the human world. With that, the portal closes. Luz is finally home. But she can’t say the same for her friends.

Luz’s mom Camila and the basilisk Vee welcome everyone into their home. A montage shows the passing of months as everyone gets as comfortable as they can in the human world. But Luz and her friends aren’t giving up on finding a way back to the Boiling Isles.

One day while Luz is at school, Amity decides they all need to be more proactive about looking for a way to create a portal door. They wonder if other witches have come to the human world before them, and if they’ve left behind anything useful.

With the help of Flapjack, they discover a map/secret code under the floorboards of their shed. It looks like it has to do with the portal door.

At school, Luz is invited to a Haunted Hayride Event for Halloween. When her mom drives her home, they pass by a car accident. A young girl says it was a monster that caused them to crash. The scene pans to the side of the road, where we see a skull that looks like Belos’ monstrous form (and his mask from when he was emperor). Green sludge drips from the skull.

At home, Gus introduces Hunter to a book he found in Camila’s basement called “Cosmic Frontier.” The sci-fi novel has a character who is a clone. It’s likely Gus already knows about Hunter being a Grimwalker from when he looked into Belos’ mind in season 2. Now, he’s trying to give Hunter a character he can relate to.

Luz wrestles with guilt over helping Belos when she went back in time with Lilith. She thinks she caused all this trouble to happen. Camila struggles with feeling guilty too–over sending Luz to camp and not letting her express herself the way she needed to.

Amity, Willow, Gus, and Vee head out to try to find the meaning of the secret code they found. They go to the Gravesfield Historical Society, where Masha is working. She points out that the map looks like a riddle. They then piece together the riddle to discover that the code is leading them to Titan’s blood: exactly what they need to create a portal.

Amity decides they should wait to tell Luz their discovery. They’re going to surprise her at the Haunted Hayride.

Hunter thinks he saw Belos in the form of green sludge. When Luz returns home, she helps him look, but they only find a rat. However, as they turn and walk out of the basement, Hunter casts a shadow behind him that looks oddly like Belos.

At the Halloween event, Masha takes them on the haunted hayride and regales them of Gravesfield stories from the 1600s. When she tells them of the Wittebane brothers, their ears perk up.

The story goes that Caleb and Phillip Wittebane were witch hunters in Gravesfield. They then met a real witch named Evelyn who whisked off Caleb to another world. Phillip followed to try and save Caleb, and neither brother was seen again.

Masha comically sums this up as “sounds like big bro got a hot witch girlfriend and little bro got upset.” Funnily enough, this may very well be what happened (that is, given Evelyn’s resemblance to Eda Clawthorne in Masha’s story and the Wittebanes’ supposed connections to the Clawthorne family).

Later, Hunter sees Belos in the woods. He confesses to Luz what he saw, as well as Amity’s plan to surprise her about the Titan’s blood. He thinks Belos is here for the blood as well. Using the secret code, he and Luz go into the woods.

Meanwhile, Camila comes across Luz’s video diaries at home. She plays the one Luz recorded last night. In it, Luz sadly confesses that she’s going to tell her friends she won’t be returning with them to the Boiling Isles. Seeing how sad Luz is, Camila knows she can’t let this happen.

She goes to the Haunted Hayride event where she finds Luz’s friends. They don’t know where Luz and Hunter got off to, so Vee starts tracking Luz’s phone.

In the woods, Luz realizes she can do magic the closer she gets to the Titan’s blood. Hunter runs ahead of her. When she catches up to him, she finds Flapjack hiding from him in fear. Hunter isn’t himself anymore. He’s possessed by Belos.

Belos finds the Titan’s blood buried in the ground (it’s notably stoppered by an owl’s head) just as Luz’s mom and friends catch up with them. In front of them, Belos thanks Luz for helping him meet the Collector. Thanks to her, he can finish his work as a witch hunter.

During their fight, Belos grabs Flapjack. “Goodbye, Evelyn,” he says. He then tears his claws through the bird. But it breaks out of his grasp.

Hunter and Belos start fighting each other from within the same body. Hunter throws the vial of blood into a lake, so Belos dives after it. It’s Camila who saves Hunter from drowning.

Then Belos separates from Hunter and takes on his monstrous form. Smashing the vial of blood against an archway, he creates a portal door and steps through.

When he’s gone, Flapjack approaches an unconscious Hunter. The palisman exudes light, which is absorbed by Hunter’s body. Eventually, Flapjack disappears and Hunter wakes up, his eyes now brown instead of their usual pink.

Luz confesses to everyone her full role in helping Belos find the Collector. She starts to say she won’t be returning to the Boiling Isles with them, but Camila interrupts. She tells Luz she’s going to go with her to the demon realm. It’s their duty to help her friends.

Luz’s friends all rally around her and assure her they’re not mad. Belos would have tricked anyone. One by one, they step through the portal.

Before Amity steps through, she tells Luz she really wants her to be part of her future. But she makes her promise not to hide anymore. Amity kisses Luz on the cheek before stepping through.

While Vee decides to stay in the human world to help keep up appearances, Camila and Luz take hands. They then walk through the portal together.

It’s difficult to do what Dana Terrace and her creative team have done with this episode. Slotted with only three episodes to conclude the series after Disney unexpectedly cancelled the popular children’s fantasy show, Terrace pulls off an incredible feat with a stunning season premiere.

What could have rushed was seamless and natural. Though it’s unfortunate to need a montage, it certainly helped in establishing how each character was growing and adapting to the human world (it also immediately endeared Camila to me).

As expected, Luz’s return came with a bittersweet mix of emotions. While we’re accustomed to her being a ball of light and wisecracks, it made perfect sense the direction writers took her character in this episode. A heart-wrenching arc plays out about the nature of Luz’s and Camila’s guilt, wrapping up with a heart-warming conclusion that teaches a lesson on moving forward and forgiving oneself.

We get the sense that things will get better for Luz, even if they’ll still be challenging. It’s a lovely place to end the episode.

The plot thickens now with both Belos and The Collector to face off with in the demon realm. And intrigue develops too. Who is Evelyn and what is her tie to Flapjack?

Signs point to her being one of Eda’s ancestors, as well as Flapjack originally being Caleb’s talisman–but we’ll see how the final two episodes connect the dots. Let us know any theories you have!