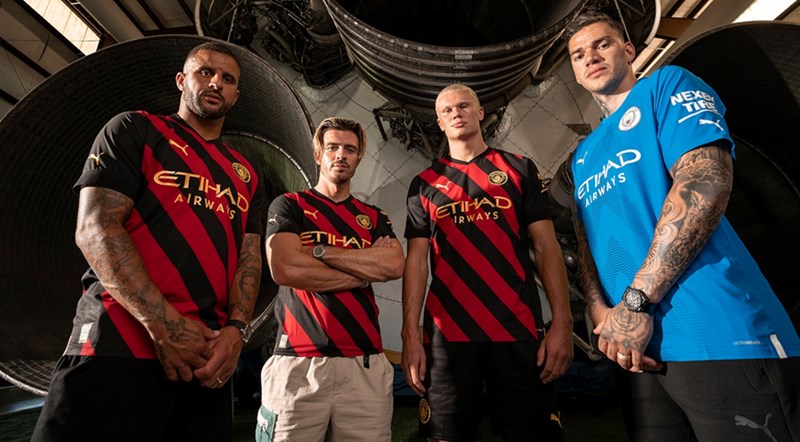 PUMA has today launched the 2022/23 Manchester City Away kit. The new jersey has been designed in tribute to a classic City style worn during one of their most successful eras and celebrates the Club’s heritage of playing fearless football.Past and present, when City take to the road they put on a show, turning heads with exciting, technical football. For the new season’s Away kit PUMA has reinvented a classic made famous by the Manchester City class of 1969. Conceived by the legendary Malcolm Allison, the kit featured red and black vertical stripes that proved triumphant at the 1969 FA Cup Final, and the 1970 League Cup and European Cup Winner’ Cup Final, earning their place among the fans all-time favourites.

Manchester City will debut the new Away kit on July 20th during their pre-season tour match against Club America. To mark the launch and to celebrate the anniversary of the first moon landing on July 20th, 1969, members of the Manchester City squad visited the NASA Space Centre in Houston ahead of the club’s fixture. The date also coincides with Manchester City’s first red and black Away kit launch launched in 1969.

“Manchester City are one of the most exciting teams in the world, they always put on a show. For the Away jersey we wanted to bring back a popular design synonymous with some of the most successful City teams of the past, and infuse it with new energy,” said Marco Mueller, PUMA Senior Head of Product Line Management Teamsport Apparel. “For the first time ever, we have placed the stripes at an angle, to pay tribute to the three rivers on the Club’s crest to create a bold and striking design. To celebrate the greatest show on the road we decided to launch the kit in Houston during the Club’s pre-season tour, with the fixture coinciding with the anniversary of the first moon landing and the Club’s first red and black Away kit.”

“It’s fantastic that the Club and PUMA have been able to work together to reinvent a classic and iconic shirt design from an important era of the Club’s history. I hope it brings a sense of nostalgia and pride to our fans around the world, in the same way it has for me,” said Club Ambassador Mike Summerbee. “I’ll be looking forward to seeing the shirt in action during our pre-season fixture against Club America and hope our fans in the US and those watching around the world are too.”

The new jersey arrives in two iterations. The Authentic jersey features ULTRAWEAVE performance fabric and dryCELL sweat-wicking technology, making the jersey the lightest and most comfortable PUMA has ever made. The Replica version is made with 100 per cent recycled polyester and equipped with dryCELL sweat-wicking technology to keep you dry and comfortable throughout the 90 minutes and beyond – no matter the time, pitch or place. Both jerseys are made with 100 per cent recycled materials, excluding the trims and decorations as a step toward a better future.