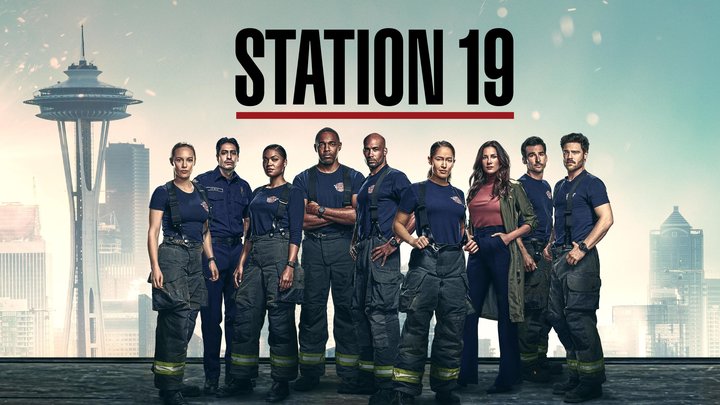 Pick Up the Pieces

Episode 5 of Station 19 starts with Andy on a video call with her mom. She is preparing for a date and her mom is helping her pick out a dress. Her mom says she is proud of her for dating outside the fire department and Andy says she knows what she wants. She casually brings up Eli and says he is the kind she doesn’t want. I am not sure she knows what she wants because she and Eli have intense chemistry.

Elsewhere, the night is taking a turn for Maya and Carina. Carina is trying her best to reconnect with Maya by recreating their first night together. She tells Maya that she loves her and they will get through their current hurdle. They end up making love and Carina assumes that they are reconciling.

Our happy couple, Vic and Theo are at the station for a night shift and Theo is inspecting the fire station. He feels anxious as Beckett is ignoring the little things which are part of his job. Vic offers to help him but he asks her to focus on preparing for her girls boot camp.

The next morning, the team is surprised to find Maya making them breakfast while being all giddy. Ben jokes that her time off did wonders for her and she agrees she enjoyed herself. It is also a clinic day so Ben is looking forward to enjoying a meal before it gets hectic.

Their lovely breakfast is ruined when Dixon leaks Travis’ arrest record to the press. Vic hurries to assure Travis that they can fix the situation but Travis is angry that they didn’t predict Dixon’s move.

Andy and Sullivan are also forced to cut their breakfast short as they are called to handle a crisis call. During the ride, Andy tries to advise Sullivan on his “lady problems” and tells him to ask for what he wants. Sullivan is in love with Natasha but they are both afraid of the professional repercussions that will follow once they go public with their relationship.

They soon arrive at their crisis-call destination and find a man named Raphael who plans to commit suicide by jumping off the building.

Back at the station, Ben spots Gibson sleeping in his car and invites him to the clinic. He takes care of his wrist and allows him to take a shower and change clothes at the station. Gibson is not happy with the changes Ben and Carina have made with the clinic. Ben tells him to deal with it or come back and do the job himself. Still, at the clinic, Carina finds herself in a strange situation when a young woman leaves a document with her asking her to deliver it to Gibson.

Natasha is also present at Station 19 for the start of her new pilot program to monitor the fire station units reporting incidents. She advises Travis on how to move forward with his campaign and asks him to get someone willing to sling back mud at Dixon. Meanwhile, Theo advises Vic to reconsider if she wants to remain Travis’ campaign manager. It is clear that she is not ready to focus on that responsibility.

The team is called to deal with a hazardous situation at a battery factory. The workers are in a room that is sealed and impenetrable. They can’t get to them without the manager’s passcode to overrun the new digitized system. The problem is that the manager didn’t show up for work and they are having a hard time contacting him.

Natasha who is listening to both crisis calls realizes that the manager they are looking for is Raphael. Sullivan and Andy do their best to talk him off the cliff and take him to the factory to save the stranded workers. Fortunately, they get there in time and Raphael saves the day.

After the calls, the team heads back to the station and Vic tells Travis that he should hire Eli for the job of his campaign manager. Eli appears at that opportune moment and argues his case but Andy is afraid that Eli will drag Travis to the dark side.

Maya and Carina talk and she asks if Carina took a pregnancy test. Carina says that she is waiting for Maya to get help first. Maya tells her that she is working through her pain and frustrations in her own way and that she would appreciate it if Carina stopped trying to control her. They are back to the same fight that seems like it will never end.

Theo asks to speak to Natasha and he tells her that Beckett is a bad leader and it is making him anxious. He is afraid that Beckett will make some bad calls and it will cost the team.

Andy delivers the document to Gibson and she asks him to come back to his job. Gibson promises to talk to Natasha. Andy is relieved to hear this and gives him some privacy to read the document.

The episode ends with Natasha being conflicted about whether to tell Sullivan her real feelings for him.

Theo directly approaching Natasha about Beckett is a good move and Natasha should take these ongoing complaints against Beckett seriously.

I am curious to learn what the mysterious letter is and how it will impact Gibson. Will it motivate him to get his life together or will it push him further off the edge of a cliff?

Sullivan and Natasha need to either let go or deal with their relationship in a way that doesn’t hurt them both. They should figure out how to deal with this situation instead of sneaking around and hiding how they feel.

Lastly, Eli would make a good campaign manager, hopefully he will stick around long enough to make Andy fall for him. What are your thoughts on these two?