Photo of alleged mastermind of Imo attacks, Nnamdi Okafor with leader of the Indigenous People of Biafra (IPOB) Nnamdi Kanu has surfaced after his arrest.

LIB reported earlier that Nnamdi Okafor was allegedly arrested for allegedly sponsoring the activities of the unknown gunmen linked to the various killings, burning of Police stations as well as the attack on Owerri correctional centre.

Vanguard reported that Okafor, a director of Pecubel hotel was nabbed at Aboha-Ohi around lifeline Assembly Owerri/Orlu road in Imo state.

Shortly after his arrest, a photo of him with the leader of the secessionist group surfaced. The photo which was shared in 2020 came with the caption “The only man we can die for, hope for Kanu hope for our Biafra nation”.

Good News: One of the sponsors of the “ungun known men” responsible for killings and burning of Police stations in Imo has been arrested, his name is Nnamdi Okafor and guess what, he’s an IPOB member…. Las Las the unknown are getting known 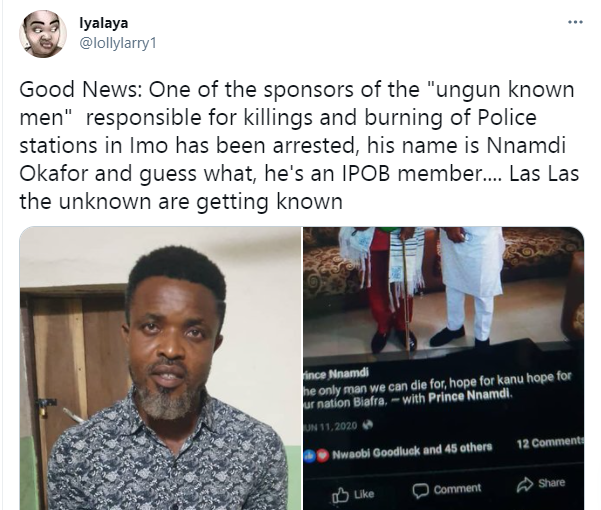