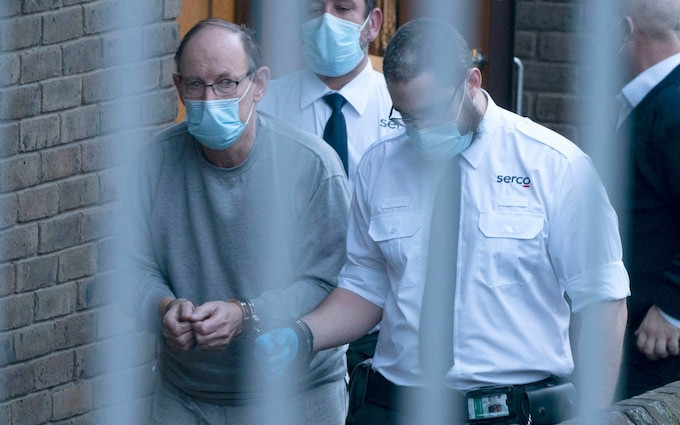 The 68 year old beat and strangled Wendy Knell, 25, and Caroline Pierce, 20, to death before sexually assaulting them in two separate attacks in Tunbridge Wells, Kent, in 1987. He also filmed himself abusing corpses, including a nine-year-old girl, two 16-year-olds, and a 100-year-old woman, over 12 years before his arrest in December 2020.

Fuller was charged with 12 more counts of sexual penetration of a corpse and four counts of possession of extreme pornography on Tuesday, October 4.

He spoke only to confirm his name, date of birth, current residence, and to enter no plea to all 16 charges.

They include the sexual penetration of a corpse, possessing an extreme pornographic image involving sexual interference with a corpse, and taking indecent images of children.

Fuller will be remanded in custody at HMP Frankland and is set to appear again at Maidstone Crown Court on November 3.

Fuller received two whole life sentences in December 2021 after admitting sexually assaulting at least 102 female corpses while working as an electrician in a hospital morgue.

The pensioner pleaded guilty at Maidstone Crown Court to their murders, as well as 51 other offences, including 44 charges relating to 78 victims in mortuaries between 2008 and November 2020.

His crimes first came to light after he was linked to one of Britain’s longest unsolved double killings more than 30 years ago.

During the investigation, Fuller was linked to the 30-year cold cases by a DNA breakthrough that then led police to his stash of sickening recordings of himself abusing corpses.

On Tuesday, police brought a further 16 charges against him in relation to sexual offences committed in a mortuary setting.

Kent Police said: ‘An investigation by the Kent and Essex Serious Crime Directorate has led to evidence which relates to a total of 101 victims in these mortuary settings.

‘The latest charges are connected to the 23 remaining victims, of all whom were deceased adult females. They cover a period between 2007 and 2020.’

Fuller, from Heathfield, East Sussex, who is being held at Frankland Prison in Durham, has been charged with 10 offences under section 70 of the Sexual Offences Act 2003, which relate to offences involving 10 identified victims.

He has also been charged with two further offences under section 70 of the Sexual Offences Act 2003, relating to offences involving three unidentified victims.

Police also brought two charges against him under section 63 of the Criminal Justice and Immigration Act 2008. These relate to the possession of extreme pornography in connection with 13 identified victims.

And two further charges under section 63 of the Criminal Justice and Immigration Act 2008 which relate to the possession of extreme pornography in connection with 10 unidentified victims.

In December 2021, Fuller was also given concurrent sentences totalling 12 years, in respect of further unrelated charges he pleaded guilty to.

These included sexual offences against 78 deceased females at mortuaries in Tunbridge Wells Hospital and at the former Kent and Sussex Hospital, between 2008 and 2020.

He had worked there as an electrician since 1989.