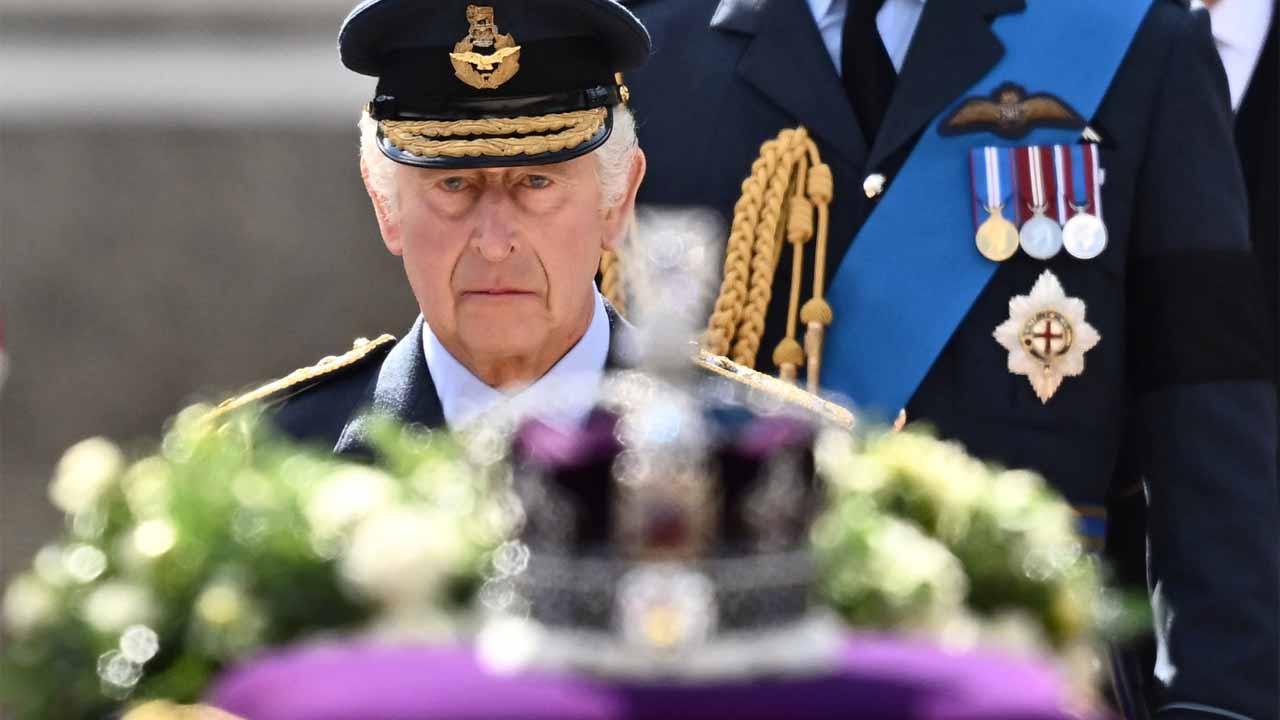 King Charles III headed to Wales Friday for the last of his visits to the UK’s four nations, including a meeting with its republican leader, as miles-long queues to see his late mother’s coffin reached capacity.

Ahead of Monday’s state funeral of Queen Elizabeth II, Charles and his three siblings — Princess Anne, Prince Andrew and Prince Edward — were due to hold a family vigil in front of the flag-shrouded casket as it lies in state in parliament.

The so-called Vigil of the Princes, with all four royals in ceremonial military uniform, will last for 15 minutes from 1830 GMT.

Eight of the queen’s grandchildren, including princes William and Harry, will hold a similar vigil on Saturday evening, royal sources confirmed.

Her death last week at the age of 96 has triggered an outpouring of emotion, with tens of thousands queueing for hours, many through the night, to pay their respects to the late monarch in Westminster Hall.

The queue was paused for “at least” six hours after a park at the end of the line reached capacity, the government said.

Charles, until last week the longest-serving Prince of Wales in history, was due to fly by helicopter to Cardiff early on Friday.

A spokesman for the king said he had a “lifelong commitment to the country’s people” and would have a private audience with Welsh First Minister Mark Drakeford, of the centre-left Labour party, during his visit.

Protests were threatened after Charles was quick to pass the prince of Wales title to his son William last week. But Drakeford — an avowed republican — downplayed that prospect during the king’s visit.

“I don’t think that this is the week in which that debate needs to surface, but people have that right,” he told the BBC Friday.

“I think it will be exercised with restraint, and it will be a footnote to the dominant feelings of the day.”

‘Unique and timeless’
The queen will be honoured with a state funeral — the first Britain has seen in nearly six decades — at Westminster Abbey on Monday morning, with more than 2,000 guests expected.

After the service, the coffin will be transferred by royal hearse to Windsor Castle, west of London, before a committal service at St George’s Chapel attended by many past and present royal staff.

A private burial will follow attended only by members of the royal family in which the queen will be laid to rest alongside her late husband Philip, parents and sister.

US President Joe Biden, Canadian Prime Minister Justin Trudeau, Australian leader Anthony Albanese and French President Emmanuel Macron have all confirmed their attendance at the funeral, as have Japan’s Emperor Naruhito and numerous other royals.

“The queen held a unique and timeless position in all our lives,” Duke of Norfolk Edward Fitzalan-Howard, also known as the Earl Marshal who is organising the funeral, told reporters.

“It is our aim and belief that… the next few days will unite people across the globe and resonate with people of all faiths, whilst fulfilling Her Majesty and her family’s wishes to pay a fitting tribute to an extraordinary reign,” he said.

Police have mounted a massive security operation ahead of the funeral, as the crowds file past the queen round the clock all weekend and global dignitaries jet in.

Early Friday, two police officers were stabbed in central London, but the Metropolitan force ruled out any link to terrorism.

An official delegation from China has reportedly been banned from attending the lying in state following an intervention by House of Commons Speaker Lindsay Hoyle, parliamentary sources said.

It comes after China sanctioned several British lawmakers over their criticism of the country’s human rights record.

The line to enter the vast hall where it has rested since late Wednesday has attracted an endless stream of mourners, and the government said early Friday that those at the end faced a wait of at least 14 hours.

The casket is draped in the Royal Standard flag, with the Imperial State Crown, her ceremonial Orb and Sceptre on top, with tall, flickering candles at each corner.

The sombre atmosphere inside is completed with guards in ceremonial uniform posted around the podium in a constant vigil.

Mourners marked their moment in front of the coffin in various ways, from bows or curtsies to the sign of the cross or by simply removing their hats, an AFP reporter observed Friday.

Some wiped away tears. Others brought infants in pushchairs. Old soldiers stopped and gave one last salute to their former commander-in-chief.

Meanwhile, in Cardiff, crowds gathered ahead of Charles’s visit.

“Something like this won’t happen again,” said barman Jack Grimshaw, 27, who turned out with his young son.

“The royal family has been around for so many years (but) we didn’t have a new king for so long.”

Other senior royals have kept up visits to other parts of the country.

William and wife Kate on Thursday travelled to Sandringham, the family’s private winter retreat in eastern England, to view floral tributes left by the public.

Elizabeth’s youngest son Prince Edward and his wife Sophie visited Manchester in northwest England to view a book of condolence at the city’s central library and floral tributes.