After a long and patient wait in the sun and the rain, the first members of the public, some in tears, gained access to Queen Elizabeth II’s lying-in-state Wednesday in the thousand-year-old Westminster Hall.

The hall in parliament was opened for the public — many of whom had braved downpours to camp out overnight — to pay their respects after the queen’s flag-shrouded coffin was brought from Buckingham Palace.

“Inside it was really quite calm and incredibly emotional. A lot of people were in tears, but there was total silence,” 50-year-old accountant Sue Harvey said after emerging from the cavernous hall. 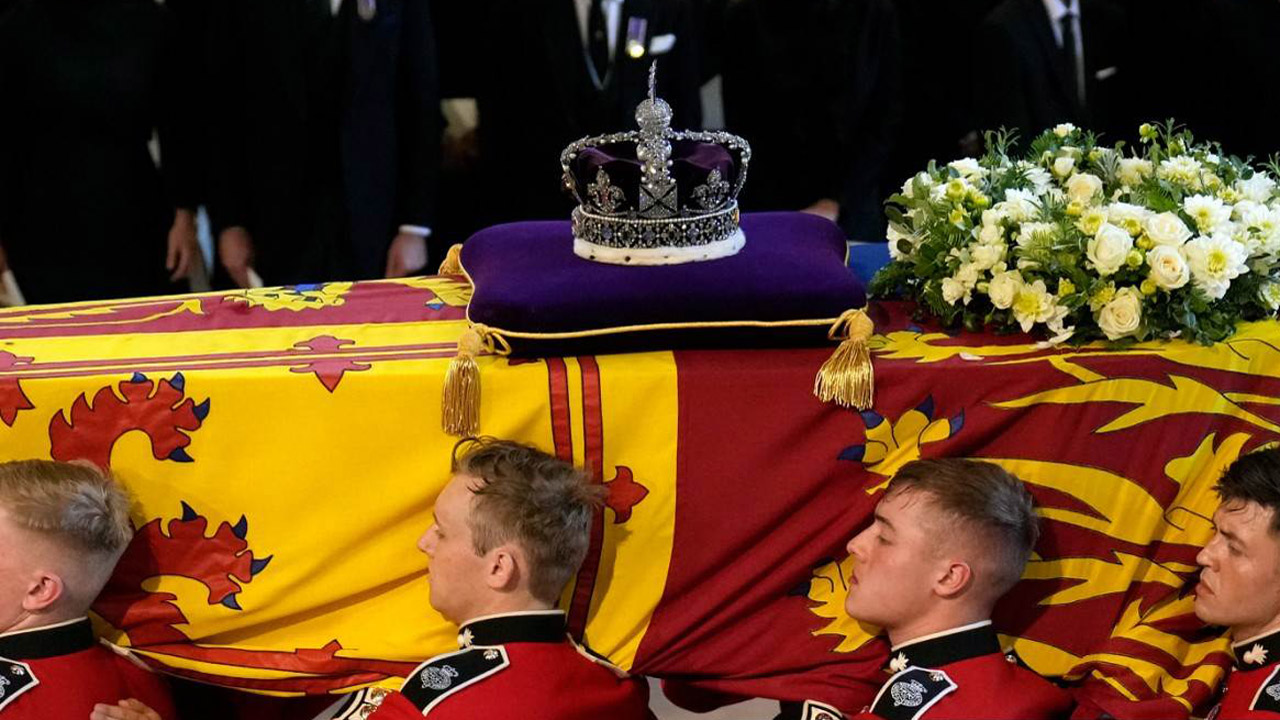 Pallbearers from The Queen’s Company, 1st Battalion Grenadier Guards carry the coffin of Queen Elizabeth II into Westminster Hall at the Palace of Westminster in London on September 14, 2022, to Lie in State following a procession from Buckingham Palace. – Queen Elizabeth II will lie in state in Westminster Hall inside the Palace of Westminster, from Wednesday until a few hours before her funeral on Monday, with huge queues expected to file past her coffin to pay their respects. (Photo by Christopher Furlong / POOL / AFP)

“She is everything I have known. I wanted to make sure I did see her, no matter how long the queue was going to be,” she told AFP.

Prior to the start of the public part, the lying-in-state began with a short Anglican service before black-clad members of parliament including Prime Minister Liz Truss filed past the coffin, bowing their heads.

To the strains of a military band playing funeral marches, King Charles III had earlier led his family in procession behind a horse-drawn gun carriage bearing the coffin, before it was placed on a platform guarded by soldiers inside the most historic part of parliament. 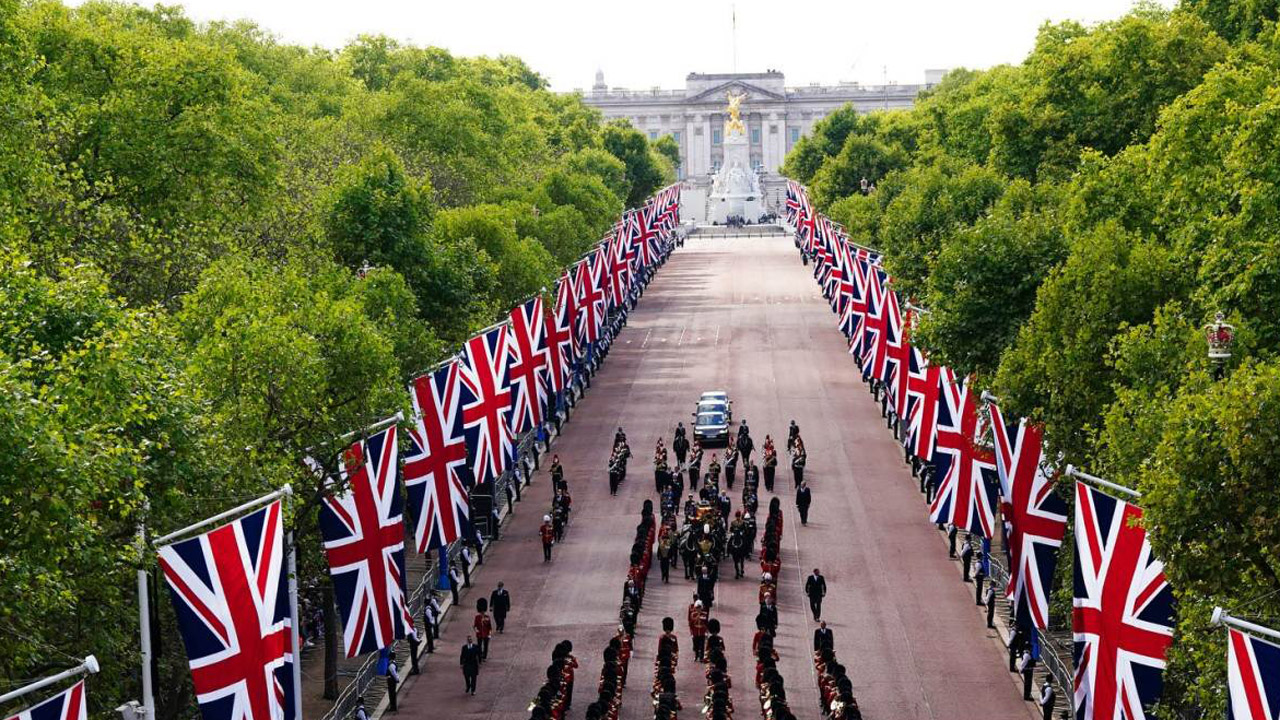 A general view of the coffin of Queen Elizabeth II, adorned with a Royal Standard and the Imperial State Crown and pulled by a Gun Carriage of The King’s Troop Royal Horse Artillery, during a procession from Buckingham Palace to the Palace of Westminster, in London on September 14, 2022. – Queen Elizabeth II will lie in state in Westminster Hall inside the Palace of Westminster, from Wednesday until a few hours before her funeral on Monday, with huge queues expected to file past her coffin to pay their respects. (Photo by Victoria Jones / POOL / AFP)

The king, his siblings, and sons, princes William and Harry, walked at 75 steps a minute behind the gun carriage. Big Ben tolled out each minute as the casket — topped with the Imperial State Crown — passed in front of hushed crowds lining the route.

“I remember when (the queen’s father) King George VI died, it was in winter, I was nine,” Ian Gammie, 79, said after watching the procession.

“It’s like completing a journey: from watching the coronation of the queen in 1953 to paying tribute to her today,” he said.

– Miles-long queue –
The grand procession through the flag-lined heart of London represented the latest step in 11 days of intricately choreographed national mourning that will culminate with the funeral on Monday of the UK’s longest-reigning monarch.

The sight of the new king’s two grief-stricken sons inevitably evoked memories of 1997, when William and Harry, then aged just 15 and 12, walked, heads bowed, behind the coffin of their mother, Princess Diana.

But it comes with the once-close brothers now estranged, after Harry’s move to the United States. 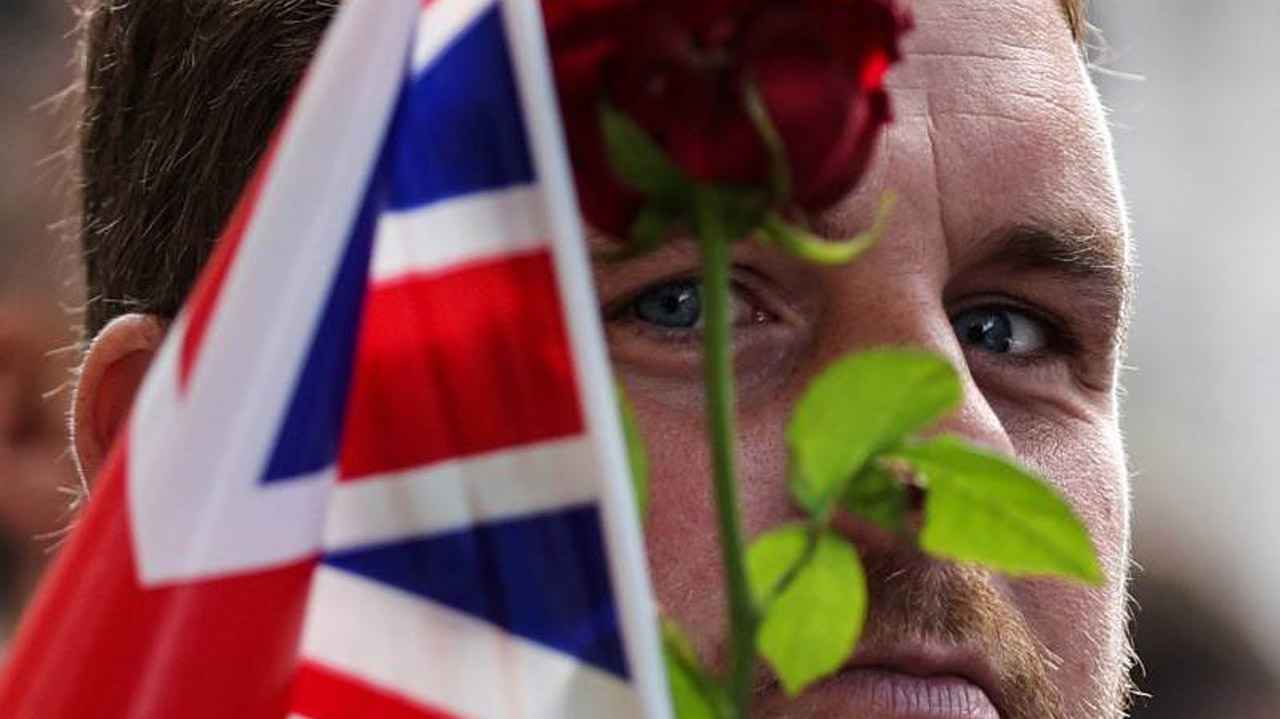 A member of the public holds a rose during the procession of Queen Elizabeth II’s coffin from Buckingham Palace to the Palace of Westminster, in London on September 14, 2022. – Queen Elizabeth II will lie in state in Westminster Hall inside the Palace of Westminster, from Wednesday until a few hours before her funeral on Monday, with huge queues expected to file past her coffin to pay their respects. (Photo by Adrian DENNIS / POOL / AFP)

The public has been warned they will face an endurance test to see the queen’s coffin with lines that could tail back five miles (eight kilometres).

Hundreds of people were already queueing at around 8:20 am with those at the front having spent the night equipped with blankets, camping seats, tents and rain ponchos.

Waiting in line earlier in the day, Brian Flatman, 85, said there was “no way” he would pass up the chance to pay his respects having missed the queen’s 1953 coronation.

“I was 16, we got there before midnight, Hyde Park Corner, superb position, but very quickly I became suddenly ill and had to crawl all the way to South London,” he recalled.

“This time there is no way I can miss that. I will dedicate a few seconds there (by the coffin) to her life of dedication. What an example.” 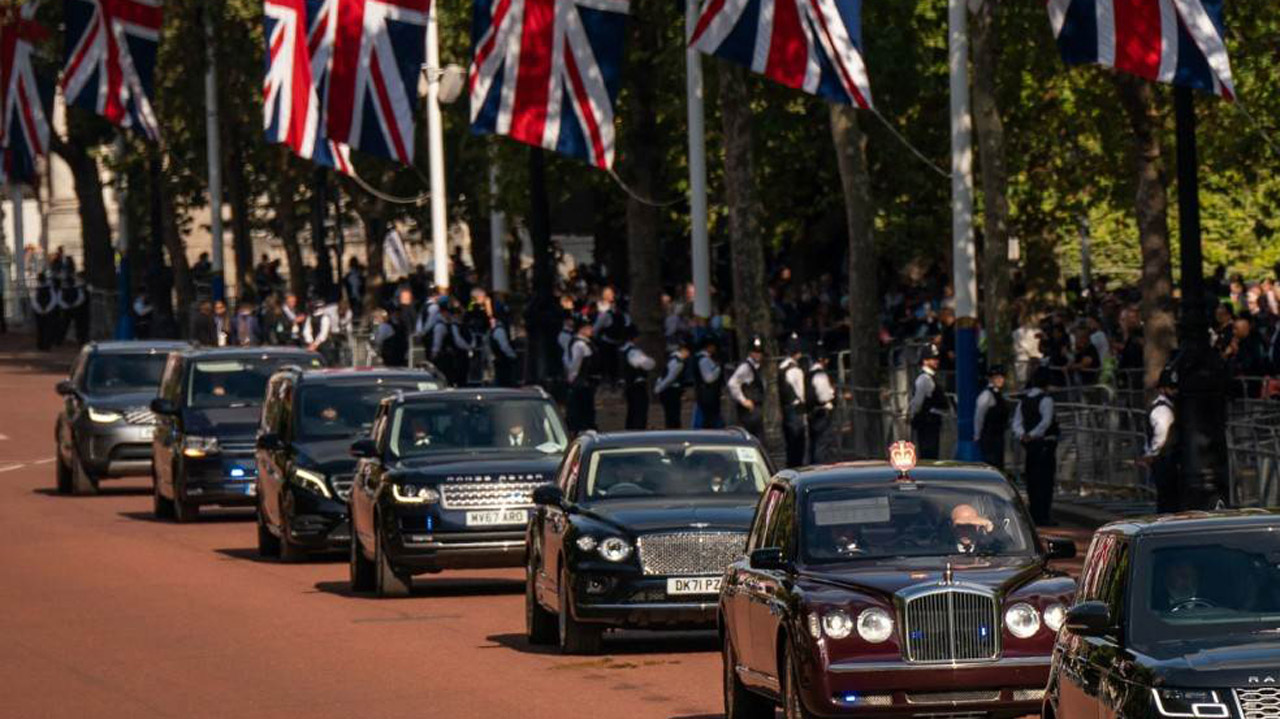 Strict rules and airport-style security measures have been put in place, with “far more” people expected than the 200,000 who filed past the coffin of the queen’s mother when she died in 2002, according to the government.

“It’s a massive challenge for the Metropolitan Police and for me personally, but we have been preparing for many, many years,” the newly appointed head of the London police force, Mark Rowley, told Sky News.

– UK tour –
The body of the late 96-year-old queen, who died “peacefully” at her Balmoral estate in Scotland on Thursday, was flown to London aboard an RAF plane on Tuesday evening from the Scottish capital Edinburgh.

It was then driven to Buckingham Palace, past crowds of motorists who stopped their vehicles at the side of the road to catch a glimpse of the coffin, lit up in a specially built hearse.

The London procession mirrored a similar ceremony in Edinburgh on Monday when her coffin was driven through the hushed streets of the city to lie at rest at St Giles’ Cathedral.

There, some 33,000 people filed past the coffin overnight to Tuesday afternoon, the Scottish government said.

“Scotland has now bid our Queen of Scots a sad, but fond farewell. We will not see her like again,” said First Minister Nicola Sturgeon, who wants Scotland to separate from the United Kingdom.

After Scotland and England, Charles continued his tour of the four nations of the UK on Tuesday by visiting Northern Ireland for the first time as king. He visits Wales on Friday.

The 73-year-old new head of state has won wide praise in the British media for his dignified and often heartfelt reaction to his mother’s death, which has led to a rare moment of public unity in Britain.

He has seen his popularity recover since the death of his former wife Diana in a 1997 car crash — and his ratings have surged in recent days, according to a new survey on Tuesday.

The mourning has also obscured — albeit briefly — the broader country’s sharp political divisions and a severe cost-of-living crisis that is expected to cause a major increase in poverty over the winter.

– No invite for Putin –
Not everyone shares the public mood of sadness and remembrance sparked by the queen’s death, with royal fatigue increasingly evident on social media in the face of blanket media coverage.

British police have also faced criticism from civil liberties groups over their treatment of anti-monarchy protesters who have publicly challenged Charles’s accession to the throne.

Video footage and witnesses have drawn attention to police arresting or intimidating people who shouted slogans against the monarchy or held up placards reading “Not My King”.

The queen’s funeral will take place in Westminster Abbey, next to parliament, in front of 2,000 VIP guests, with the day declared a public holiday in Britain.

Hundreds of heads of state and government, as well as global royalty, are expected, but Russia, Belarus and Myanmar have not been invited to send representatives.

US President Joe Biden has confirmed he will attend, as will French President Emmanuel Macron and Japan’s Emperor Naruhito.