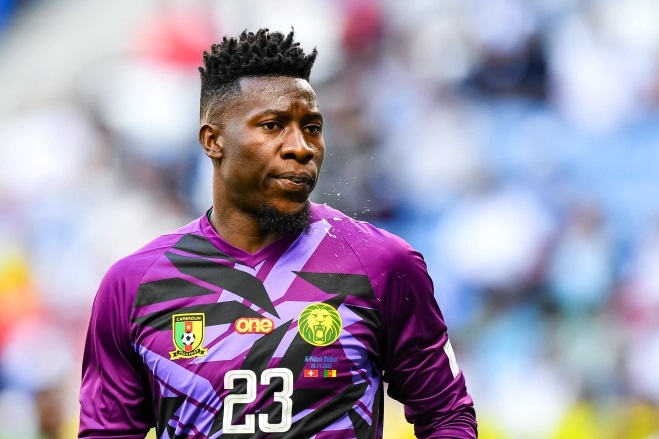 Andre Onana has flown home from the World Cup.

The Cameroon goalkeeper left his teammates at the competition after being suspended for disciplinary reasons, Sun UK reported.

Onana started in Cameroon’s World Cup opener against Switzerland and performed well in the 1-0 defeat.

But the Inter Milan star was left out of the matchday squad against Serbia.

Onana and Rigobert Song had a dispute over the keeper’s playing style which resulted in a shouting match, report the Daily Mail.

Song is believed to want a more traditional goalie between the sticks but Onana, 26, is very capable of playing out from the back and refused to change his style.

As a result of their argument Onana was removed from the squad and he has now flown home.

And the CFF have confirmed he’s now been temporarily suspended.

A statement read: “The Cameroon Football Federation hereby informs the public that following Mr. Rigobert Song Bahanag’s decision, the player Andre Onana has been temporarily suspended from the group for disciplinary reasons.

“The Cameroon Football Federation reiterates its full support to the head coach and his entire staff as they implement the federation’s policy aimed at preserving discipline, solidarity and cohesion within the national team.

“FECAFOOT further reaffirms its commitment to create a peaceful atmosphere for the team and to provide them with adequate facilities for an outstanding performance.”

In his absence, Song picked Devis Epassy, who has just five caps to his name.

It is a big blow for Onana who was banned for a year in 2021 for a doping violation.

The shot-stopper served nine months of that sentence though always claimed his innocence, suggesting he had accidentally taken one of his wife’s pills while feeling unwell.

The former Ajax star was also involved in a horror car crash while on international duty earlier this year.

Onana was travelling to Cameroon’s training camp ahead of the crucial World Cup play-off against Algeria and escaped the wreckage unhurt.

The former Arsenal and Chelsea transfer target featured in both games against Algeria and helped Cameroon to a dramatic late win over The Desert Warriors.

He signed for Inter in the summer and has rediscovered his form for the Serie A giants after returning from his drugs ban.