Manchester United boss Erik ten Hag has defended his decision to play with a false nine in Sunday’s Premier League defeat to Brighton, while he refused to confirm a move for Marko Arnautovic.

The Red Devils made the worst possible start to the Dutchman’s reign at Old Trafford, going into half-time 2-0 down after a brace from Pascal Gross.

🗣 “[At the start of the second half], there was a good spirit and we dealt with the setback.

“But at the end of the day, we want three points. That’s what our purpose is.”#MUFC || #MUNBHA

Ten Hag had started the match with Christian Eriksen leading the line as a false nine, but shortly after the break he pushed the Dane into a deeper role, sacrificed Fred and put Cristiano Ronaldo up top.

United certainly improved, halving the deficit via an own goal and creating several opportunities to level the scores, though the Dutchman says it simply was not an option to start with a more recognised forward up top from the off.

Asked in his post-match press conference if it was a mistake to start with Eriksen as a false nine, Ten Hag responded: ‘If he was available, the striker, I would have played him.’

Probed on why he did not choose to replace the injured Anthony Martial with either Ronaldo or Anthony Elanga, the former Ajax boss said: ‘Cristiano Ronaldo has been in team training for maybe 10 days and that is too short for 90 minutes so that’s the reason we did not start him.’

Asked if he trained with the false nine, he replied: ‘Of course. We trained quite well. I think we made passing mistakes in building up, so that is nothing to do with whether you are playing with a false nine or a typical number nine.’

On Eriksen’s role, he continued: ‘Because we didn’t have the typical number nine, I knew [Eriksen] played a long time as a striker a long time ago in Ajax, dropping in.

‘I wanted to keep Jadon and Marcus on the wings, coming inside they were really good in pre-season there. When I think, finally, Christian Eriksen is the best in the midfield and actually that was also the idea that he drops and gets in between the lines and to make the game.’

United have been linked with a move for 33-year-old Austrian striker Marko Arnautovic as Ten Hag looks to bolster his attacking options, though he refused to comment on the speculation. 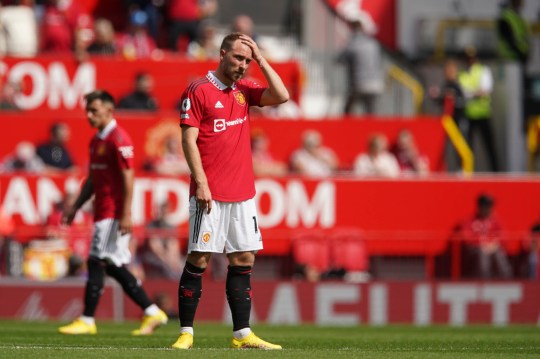 Asked about the Bologna frontman and the need to reinforce his frontline, Ten Hag said: ‘I don’t go into names because I think in this pre-season maybe 250 players are linked with Man United, so that’s it.

‘We have two strikers, maybe a third one with Rashford as well – who we considered as a striker, but he had a really good pre-season on the left side and also today he had two really good chances coming in from the left-hand side.

‘So I think it was the right decision to do it like this. But we didn’t have the typical nine, it was not available today.’

In an interview with beIN Sports, Ten Hag was also asked if he feels Ronaldo is ready to start matches yet and replied: ‘I don’t think so in this moment. But I think this game will help him and we have now one week where he will also progress.’