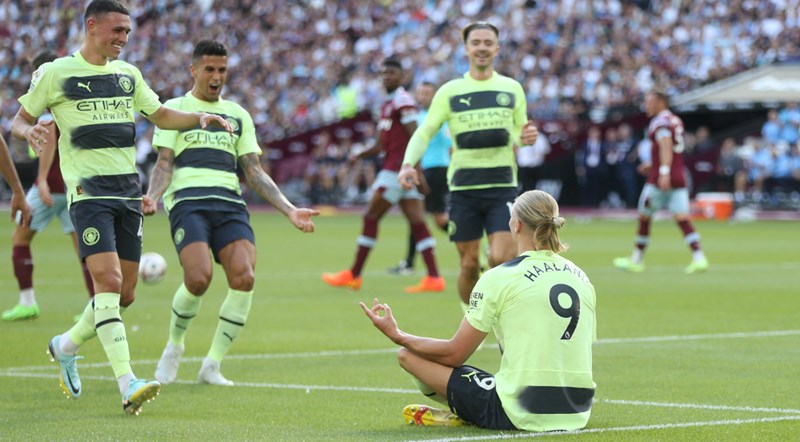 Erling Haaland scored twice on his Premier League debut as Manchester City opened their defence of the title with a 2-0 win at West Ham, while Manchester United were beaten 2-1 by Brighton in Erik ten Hag’s first game in charge on Sunday.

Haaland lived up to the hype since his transfer from Borussia Dortmund to give the champions a perfect start to the season in the searing heat of East London.

West Ham nearly derailed City’s title chances when they led 2-0 at halftime in the penultimate game of last season before Pep Guardiola’s men battled back for the point that ultimately edged out Liverpool at the top of the table.

But they were no match this time as Haaland immediately proved the value of City adding a proven goalscorer to their arsenal.

The Norwegian has been signed as the long-term successor to Sergio Aguero and started his City career just like the club’s all time record goalscorer with a double on his league debut.

Haaland had missed chances in City’s 3-1 defeat to Liverpool in the Community Shield, but Guardiola’s warning that the goals would soon flow proved to be correct.

“We know we have a threat there. He is an incredible deep runner and finisher,” said Guardiola.

“He is adapting perfectly in the way we want to play. We are going to find him more and more and hopefully we can give him the opportunity to score more goals.”

City’s patient possession game wore the Hammers down as temperatures in the English capital soared above 30 degrees celsius on Sunday.

Haaland took responsibility from the penalty spot to open his Premier League account after he had been brought down by Alphonse Areola.

West Ham started the second half with more attacking intent but that simply played into the hands of City’s new weapon as Kevin De Bruyne split open their defence with one pass on the counter-attack for Haaland to gallop clear on goal and slot low past Areola.

SEAGULLS TOO SLICK FOR UNITED

The contrasting fortunes of the Manchester clubs in recent seasons continued as United suffered another false dawn in Ten Hag’s first competitive game in charge.

Cristiano Ronaldo started on the bench for the Red Devils due to his lack of pre-season training with the Portuguese reportedly keen on an exit from Old Trafford to play in the Champions League this season.

Brighton thrashed United 4-0 when the sides last met in May and despite losing Yves Bissouma and Marc Cucurella for over £100 million since ($121 million), the Seagulls were again too slick for United’s leaden-footed defence.

Twice in nine minutes Pascal Gross ghosted in unmarked at the back post to slot into an unguarded net before halftime.

It even took a Brighton mistake for Ten Hag’s men to find the net as Robert Sanchez slapped the ball into his own net off the unfortunate Alexis Mac Allister.

Ronaldo was given a rousing reception from an otherwise frustrated crowd, but never had a clear sight of goal to deny Brighton their first ever win at Old Trafford.

“It’s the worst possible start, to be 2-0 down at halftime at Old Trafford,” said United captain Harry Maguire.

“It’s not good enough. We huffed and puffed to get one back and we had chances to equalise. It’s a bad start for us.”

Brentford did manage to come from two goals down to salvage a 2-2 draw away to Leicester.

The Foxes have been in turmoil heading into the season with long-serving captain Kasper Schmeichel joining Nice and rumours over the futures of James Maddison and Wesley Fofana.

Both started and Maddison’s corner teed up Timothy Castagne to score the opening goal.

But Brentford bounced back to take a point as Ivan Toney used his strength to fire home from close range before Josh Dasilva found the top corner.