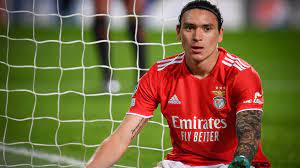 Liverpool legend Steve Nicol has urged Jurgen Klopp to play Darwin Nunez as much as possible.

The club’s record signing was used as a substitute in Tuesday’s Champions League group stage win over Ajax at Anfield.

“When I saw the team, the first thing I did was check the subs to see if Nunez had picked up an injury,” Nicol told ESPN.

“You’ve got to get the guy in, get the guy minutes on the field and get him in tune with everybody – until you do that you won’t get the best out of him.

“As we all know, he’s not the finished article, he’s very raw but what he brings is completely different to what you get from Jota and Firmino, he gives you the two things they can’t do.

“Firmino is about possession, if you can get him holding the ball up and playing with Diaz and Salah that Firmino – I think he can do that – he just needs to get better at it and he can score goals because that’s what Jota is pretty much there for.

“He’s the little guy in the penalty box that’s meant to pop up and put the ball in the net because I don’t think he does particularly well when it comes to link-up play or holding the ball up.

“This guys not going to get better until he gets minutes on the field. I don’t think the other two are particularly brilliant so get him on.”