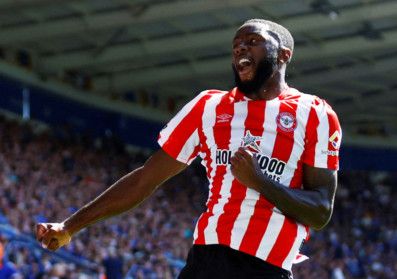 Substitute Josh Dasilva scored a superb equaliser with four minutes remaining as Brentford came from two goals down to draw 2-2 with Leicester City in their Premier League clash at the King Power Stadium today.

Dasilva went on a mazy run on the edge of the box before curling a shot into the far corner, a goal of real quality to give Brentford a point they deserved for their second-half display.

Timothy Castagne and Kiernan Dewsbury-Hall had scored in either half to put Leicester into a dominant position early in the second period, but Ivan Toney netted to halve the deficit and swing the momentum in Brentford’s favour.

Leicester went ahead just past the half-hour mark as James Maddison swung in a corner and Castagne headed in at the near post, totally unmarked with no Brentford player tracking his movement.

Youri Tielemans hit the frame of the goal with a shot from 25 metres, before Leicester doubled their advantage straight after halftime.

A poor touch from Brentford defe

Brentford were much improved in nder Ben Mee allowed Jamie Vardy to tee up Dewsbury-Hall to fire a low shot from 30 metres into the bottom corner of the net.the second period though and scored an excellent goal on 62 minutes as Rico Henrys pinpoint pass into the box was controlled by Toney, who blasted the ball past home goalkeeper Danny Ward.

Leicester hit the post for a second time through Wesley Fofanas header, before Dasilva produced his moment of magic to get Brentford a point.

Leicester travel to Arsenal in their next fixture on Saturday, while Brentford will host Manchester United later on the same day.