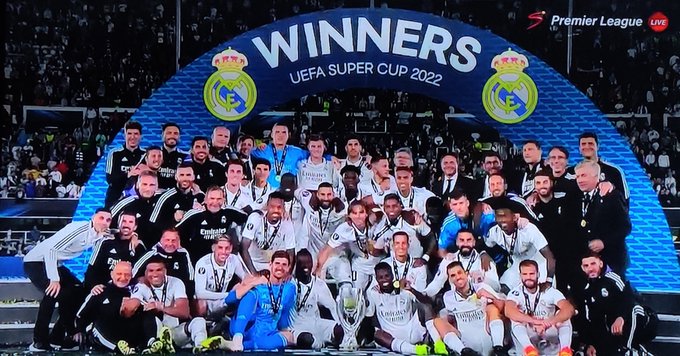 Karim Benzema and David Alaba both scored as Real Madrid made easy work of Eintracht Frankfurt in the Uefa Super Cup.

Alaba scored in the first half, tapping into an empty net after a corner routine, before Benzema linked up with Vinicius Jnr to fire home a second after the break.

Benzema’s strike was his 324th for Real Madrid, and it lifted him to second in Real’s all-time scoring list ahead of club legend Raul. Cristiano Ronaldo leads the way.

Europa League winners Eintracht had offered some resistance in the first half and had chances to score but were eventually overrun by the Spaniards.

It was only the second time the two teams had met and first in 62 years, with Madrid beating Frankfurt in the 1960 European Cup final.

Frankfurt goalscorer Erwin Stein and teammate Dieter Stinka from that day in Glasgow were in Helsinki for the rematch, but it was the 93-year-old Jose Santamaria — the only remaining Madrid player from that final — who celebrated another win.