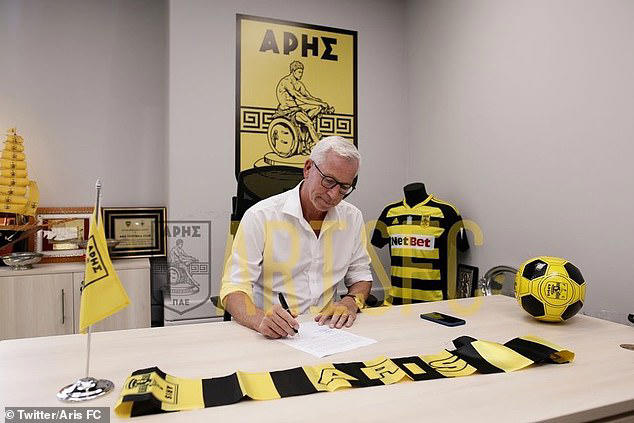 Alan Pardew has taken over as manager at Greek side Aris, putting pen to paper on a one-year deal with an optional extra year.

The English manager, 61, has joined the Super League Greece club in place of former Atletico Madrid caretaker manager German Burgos, and is set to take charge of his first game in Greece on Sunday, September 18 against Olimpiacos.

Pardew now takes up his tenth role in management at ten different clubs, in a career dating back to 1998, just three months after departing Bulgarian side CSKA Sofia, where he also served as technical director.

Aris announced the news on Twitter, writing: ‘WELCOME TO #ARISFAMILY COACH…’ accompanied by pictures of Pardew signing his contract.

Aris currently sit sixth in the Greek league, with two wins a loss and a draw from their opening four games of the 2022-23 campaign, and the Englishman becomes their third manager of the year.

Pardew is not the only former Premier League import to feature at Aris either, and he joins former Watford and Burnley forward Andre Gray, ex-Hornets defender Nicolas N’Koulou, and Ivorian winger Gervinho, who had spells at Arsenal, Palma, Lille and Roma.

After almost two years in charge at Crystal Palace in the Premier League, Pardew’s career never recovered, with a brief spell in charge of West Brom in the Championship last only 21 games.

The 61-year-old then took up roles at Eredivisie side ADO Den Haag, although he only led them through eight games due to the outbreak of coronavirus, and held several different roles at CSKA Sofia.

Initially joining as technical director, Pardew also acted as management advisor and caretaker manager, before taking on the role full-time in April 2022.

However his reign was cut unceremoniously short after a small section of CSKA fans targeted the teams black’s contingent with racist abuse as they arrived for one of their final league matches against Botev Plovdiv.

As a result, he resigned from his posts as technical director and manager with immediate effect.