The New Nigeria Peoples Party (NNPP) in Kano State said it had uncovered plans by the All Progressives Congress (APC) to induce voters. 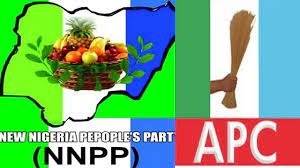 The opposition on Monday said the ruling party was set to purchase Permanent Voter Cards (PVCs) ahead of the 2023 elections.

State Chairman Garba Diso, and Secretary, Hamisu Sadi Ali, issued communiqué at the end of a workshop for NNPP candidates for federal and state offices.

The party noted that for the first time in the history of governance in the state, “the incumbent turned government affairs into a family affair, as seen in government policies and appointments”.

NNPP accused the Abdullahi Ganduje government of abandoning its primary responsibilities of protecting lives and properties “by being myopic and driven by sentiments, emotions, vendetta, and self-enrichment.”

It urged the Independent National Electoral Commission (INEC) to publish the names of all uncollected PVCs to create awareness for the rightful owners to claim them.

The communique lamented the closure and de-boarding of unity schools, non-payment of examination fees to WAEC, NECO, and NBAIS; delayed and non-payment of scholarship allowances to foreign/local students, and a non-educationally friendly environment.

The NNPP also decried the increasing “land grabbing, and dubious allocations and selling of land to intentionally deface Kano State.”

“The government of Governor Ganduje intentionally allowed these illegal practices with government approval which have resulted in flooding, building collapse and even death.”

The statement expressed concern over the flooding and collapse of buildings that occurred recently at Kantin Kwari and Civic Centre markets and sympathized with the families of those who died.

They are in fear even before the campaign starts