Exception Season 1 Ending Explained – Is the mission a success? 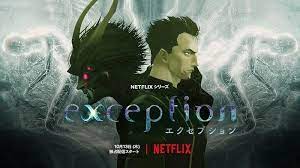 The story is pretty straightforward but it takes on extra layers of depth as the episodes tick by. The gist of it is that humanity has been driven from Earth and forced to repopulate somewhere else. Members of a scouting team are sent out to search for a planet suitable for terraforming, and have set their sights on Planet X-10.

The crew, copies of their original humans created through a biological 3D printer, emerge from “the Womb” to complete their mission. Unfortunately, one among them comes out misprinted and deformed, becoming animalist and threatening the whole project. Will the team manage to stop this monster? Or will they all die in the dark recesses of space?

Who is the traitor?

As the series progresses we, soon learn that someone has stolen the RA Bomb to sabotage the whole mission. While the group initially believe it’s Misprint Lewis, it’s soon revealed that he’s not responsible, and nor is Mack either. So who is it?

Well, it turns out it’s actually Patty! Another Patty was printed and together, they planted the RA Bomb on the Atmospheric Transformer, which is set to explode. The alternate Patty was printed before the original and she conspired to take the RA Bomb and even took material from the printing room so Patty had a copy of everyone’s eyeballs.

Patty was printed by a smaller version of The Womb, a compact, next-generation model smuggled aboard the ship. It prints extremely fast.

The two Pattys wanted the terraforming on Planet X-10 to fail because they’re activists. Their organisation protects animals from the abuse of humans. They received data that the Planetary Development Agency had been hiding. Life exists on Planet X-10 and it’s very fragile. If they terraform the planet, they’re going to kill off the species already there.

Patty A and B won’t allow humanity to perform another genocide. The original Patty went to sleep knowing all of this, while the Patty clones here intend to go down to Planet X-10 and study the lifeforms until they die. And so that brings us along to the finale.

What happens on Planet X-10’s surface?

Misprint Lewis and Mack part ways, with the mission here stopping the RA Bomb no matter what. Explosions rock parts of the ship, as Misprint Lewis finds his reprint, clinging to the butterfly necklace. He promises to get Lewis what he originally wanted- that being linked to memories of Kate of course, – and lets him go.

With the escape pods launched and heading down to the planet, Patty manoeuvres the ship to land too. Nina’s escape pod with Patty B lands on “humanity’s haven”, while Misprint Lewis makes it down as well. Oscar is still alive too, and he’s actually stuck inside the Womb, but running out of air.

With only one suit per escape pod, Patty B takes the suit for herself and leaves Nina, intending to stop Mack and Misprint from finding the RA Bomb. Mack finds Nina and manages to give her a suit to keep her alive, and together they cross the desolate wasteland.

Who is responsible for Lewis’ misprinting?

Oscar decides to check on the gravity generator, while Patty B finds Misprint Lewis. Apparently, she’s the one responsible for his printing going wrong, not the solar flare as they initially thought.

Misprint speaks of fate and destiny, pointing out that his misprinting has helped him discover the true nature of Patty’s plans and stopped her before it’s too late. And while Patty B is monologuing, Mack gets the jump on the clone and stops her.

Nina, Mack and Misprint realize that the RA Bomb is being kept in the Beanpod, as foreshadowed earlier in the season with the beansprout terraforming. They find it and unhook it, but unfortunately the bomb cannot be disarmed. The only solution is to parachute it out…but the two Pattys show up to fight it out. Mack tries to hold them both off while Lewis manually releases the levers.

Does the RA Bomb explode?

A fight breaks out on two fronts, Misprint attaches Patty A to the parachute which releases the RA Bomb. Patty B can’t be without her double so she jumps onboard too after besting Mack, holding hands as they face their fate. Speaking of which, Mack gasps for air as the bomb explodes overhead and kills her.

The explosion is devastating, and it has widespread repercussions for many of our characters. Oscar’s suit is cracked and he passes away, while Nina and Misprint Lewis are the only two survivors. The latter endured some difficult times in what followed, but together they decide to complete their mission. They honour the fallen with makeshift gravestones, with Misprint eventually passing away, leaving Nina the only survivor.

How does Exception end?

On a calm day, she launched the beanstalk into the atmosphere. The seedlings land and take root, eventually creating a network across the planet’s surface as the roots come into contact. This then connects to the Atmospheric Transformer for energy, analyzing the soil and growing straight into the air as a result.

Nina’s remaining time on the planet focused on researched the lifeforms but of course the organisms won’t survive on the new soil. Nina theorizes that those lifeforms are destined to go extinct. Water and rain follows, eventually leading to the atmosphere stabilizing for fresh air. This, in turn, sees the planet now habitable.

Nina makes preparations as the years press on, deciding to print the biometric data for Kate, which was Lewis’ final wish. She won’t be here when the migrant vessel arrives, but Kate will.

The scene cuts to Kate stepping out from the chamber and looking upon a lush, habitable world. Lewis is there too, and the pair embrace. “Everything’s been reborn here Kate, we have another chance.” Lewis says, as the camera zooms out and shows the migrant ships arriving on the lush new world.

Seeing Misprint Lewis embrace the positive side of his deformities as a plus in this situation is a surprising profound and uplifting message and throws more of those thought provoking ideas about destiny into the fold. And that’s something made all the more challenging by Patty’s plan which, to be fair, actually holds a lot of weight to it.

There are definitely parallels to 2018’s Nightflyers too, especially during the first half, with a palpable blend of horror and sci-fi. The show has been quite a good little mystery at times, but ultimately excels during its aforementioned thought provoking moments about what it means to be human.

On the whole though, this has been a pretty mixed bag series, although the story has been a definite highlight and at least ends on a decent note too.