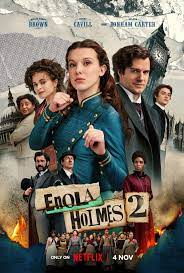 A thrilling mystery and a spunky detective that keeps you hooked

Millie Bobby Brown is back again as Enola Holmes and her fiery determination is just as endearing as it was in the first film. In a sea of average remakes, Enola Holmes remains a series that brings a fresh outlook to an old franchise.

This time, Enola takes on her first case as an official detective for Bessie Chapman, whose older sister Sarah is missing. As she investigates, Enola begins to suspect the Lyon match factory where Sarah worked, since the girls there have been dying of Typhus. Meanwhile, Sherlock has a case of his own — a financial scam with money jumping across multiple banks — but it’s proving a tough nut to crack. Soon, their paths interconnect.

The movie moves as quickly as Enola jumping from one rooftop to another. We get twists and turns, coded love letters and secret experiments. The costumes and set designs are a treat for the eye while the background score seamlessly matches the film’s emotional beats. It’s enough to keep you hooked and thoroughly enjoying.

Enola herself goes through some development, realizing that maybe she doesn’t have to do everything alone. This results in more screen time for Henry Cavill’s stoic Sherlock and Louis Partridge’s charmingly awkward Lord Tewkesbury. Helena Bonham Carter’s eccentric Eudoria and Susie Wokoma’s feisty Edith make appearances too.

David Thewlis, after his stints in Wonder Woman and The Sandman series, skillfully plays yet another villain whom you’ll love to hate. Coupled with Brown and Partridge’s sparky chemistry — involving one delightfully intense dance scene as is wont for any Victorian drama —  the whole thing is an entertainment explosion. All in all, Enola Holmes 2 is just tremendously fun.

Millie Bobby Brown does a wonderful job. Enola’s spirit is addicting and the fourth wall breaks make her adventures all the more exciting. From the very first scene, Enola grabs you by the hand and takes you along for her escapades. You’re side by side with her as her witticisms get her into tight situations and her antics get her out of them. It’s thrilling to be alongside her as she fights feminist battles — and this movie is markedly feminist.

From Enola’s mockery of Victorian rules to the overarching theme of exploitation and women’s rights, the film puts feminism at its centre. Although, their interpretation of the theme is a pretty black-and-white one. They don’t quite go into the complexities of class and race within feminism, despite having the set-up to do so.

For fans of Doyle’s Holmes, there are a few surprises in store that will provoke a knowing smile. And while you might see the most obvious one coming, it arrives with a deliciously unexpected twist. Fingers crossed for any upcoming instalments in the series to be just as fresh and unique as this sequel.

By the film’s closing credits, you get the exhilarating feeling of a rollercoaster ride coming to an end. Even after 2 hours and 10 minutes, Enola Holmes leaves you wanting more.