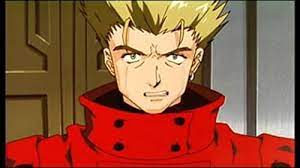 Trigun is an anime made for folks who enjoy westerns. This series has everything western fans love from run-down locales to characters wielding guns. Besides its wonderful gun fights, this anime features a slew of comedic and emotional scenes.

Trigun narrates the life of a bounty hunter named Vash the Stampede, who is rumored to be a villainous individual who’ll lay waste to anything and everything he comes across. As with many rumors spread in our world, this one about Vash is further from the truth.

In reality, Vash is a pacifist, who enjoys exploring areas and greeting locals. It’s only when Vash finds himself being targeted by legendary assassins, that he decides to take on his rumored villainous persona.

If you’re having trouble finding anime similar to Trigun, fear not! We’ve discovered 10 alternate shows that’ll give you a similar experience as Trigun.

Additionally, for each anime we’ve reviewed, we’ve included a link that allows you to view our full thoughts about the series to see if it’s worth your time.

So without further ado, we present 10 TV shows that should whet your appetite when you’ve finished streaming Trigun!

Fans searching for another show with sci-fi and western vibes should look no further than Cowboy Bebop. This anime is a classic gem with a compelling cast of characters who tackle a boatload of activities. You’ll gain a similar sense of adventure with this show as our characters never remain in one specific environment.

The locales in this show are well-designed and distinct enough from each other. The characters in this anime have wonderful personalities and distinct backgrounds and specialties. While the anime does an excellent job of fleshing these characters out and making them feel more interesting as the story continues.

The fights and struggles Cowboy Bebop’s cast tackle feel realistic and captivating. With its cast’s intergalactic adventures and stellar chemistry, you’re in for a remarkable time with Cowboy Bebop.

While both series feature different landscapes and themes, Ruroni Kenshin’s protagonist Himura Kenshin and Trigun’s Vash the Stampede have many commonalities. For the most part, both characters take on a pacifist-like attitude and approach toward life. Although Kenshin committed harsh acts toward people in the past, he adopts this peaceful demeanor later on.

Kenshin and Vash are forced into fighting people and abandoning their pacifist standpoints. The fights they endure are brutal and will get your heart pumping. Although Kenshin utilizes more physical weaponry than Vash, you’ll feel satisfied and pumped watching these two heroes battle their adversaries.

Despite being placed in many serious circumstances, Ruroni Kenshin features some ounces of lighthearted comedy. You can expect characters to display hilarious facial reactions and share witty jokes that will get a chuckle out of you. If you’re looking for another phenomenal series that follows a protagonist with a similar mindset and attitude to Vash, then Ruroni Kenshin’s worth adding to your watch list.


Gun X Sword is an anime for people that enjoy stellar fights, beautiful animation, and a memorable soundtrack. It doesn’t feature the granted plotline nor are its characters groundbreaking. This is simply a series meant to get fans laughing and mesmerized by its visuals and music alone.

That’s not to say the series doesn’t offer anything for Trigun fans. Vash and Gun X Sword’s protagonist Van have similar qualities and handle deadly situations similarly. Like Vash, Van is a laid-back individual and a person that likes to keep to himself. It isn’t until someone disturbs his peace, that he adopts this hardcore and action-loving persona.

On that note, Van’s numerous fights will get you excited and keep you invested. The locales in this world capture a similar western and sci-fi feeling as the areas Vash explores in Trigun. The animation for Gun X Sword’s fight scenes appears fluid and never looks jarring or sluggish. The sound effects implemented for the series’ mechs and clashes will keep you immersed.


The opposite of Gun X Sword would be Desert Punk. Desert Punk offers a more fleshed-out storyline with a clever mix of humor, likable characters, and catchy music. Unfortunately, this series doesn’t feature the best animation and visuals. If you can look past its lackluster imagery, Desert Punk should leave a lasting impression on Trigun fans.

Like Trigun, Desert Punk delivers a similar wasteland-like environment for our characters to explore. It offers a similar degree of comedy that you’d find with Trigun, but it leans more into the obscene. You can expect to see characters poking fun at other’s appearances or using their appearances to pull off a quick visual gag or joke.

If that sounds revolting to you, then fear not. While its visuals haven’t aged well, Desert Punk delivers incredible gun fights and action scenes. These scenes will boost your adrenaline and leave you craving more. The various subplots this anime introduces may feel lackluster, but everything holds a purpose and the story builds up to its climax at a remarkable rate.

If you’re searching for an anime that’s like Trigun but offers a heavier ounce of comedy, then Desert Punk’s worth a watch.

Gungrave follows characters who must cope and deal with issues that stem from their past. Like Trigun, this show features satisfying gun fights, well-developed characters, and a well-written storyline. It’s another show that gives off western vibes and follows a group of mercenaries.

Unlike Trigun, Gungrave feels more dramatic and less comedic. Fans shouldn’t expect this anime’s protagonists to crack jokes or display any degree of facial humor. On that note, Gungrave’s action feels more brutal and raw. Its characters don’t hesitate to murder individuals as they don’t attain any of Vash’s pacifist traits.

Gungrave can be watched and understood by anyone despite it being an adaptation of a game by the same name. While many anime adaptations of video games didn’t turn out well back then, Gungrave is one of the few that ended up winning the hearts of many. From its emotionally-driven characters to its violent action scenes, Gungrave delivers a powerful storyline that will resonate with Trigun fans.

There were two anime that kick-started the Toonami boom back in the previous decade. The first was the well-beloved Deadman Wonderland, while the other was Casshern Sins. Despite this, Casshern Sins offers a fun dystopian setting for its characters to run around in.

Like Vash, Casshern is another victim being targeted by other individuals. The reason people are after him is that they believe killing him will bring them eternal life. Despite having a bounty on his head, Casshern won’t let these scoundrels defeat him that easily.

This anime features some fun fights. The fights are on par in quality and will leave fans entertained. Casshern Sins gradually unravels the secrets behind Casshern’s past as the anime progresses. That said, Casshern Sins is more dramatic than Trigun and lacks any ounce of comedy.

If you’re looking to follow another individual who is on the run from murderous villains, check out Casshern Sins.

Like any other evil organization in a video game or horror flick, they’ll always be holding some type of carnivorous beast with the intent to kill. With Hellsing Ultimate, not only is this beast a formidable vampire, but he’s an excellent sharpshooter with otherworldly abilities.

Our tale revolves around Alucard, a vampire who works for Integra Hellsing’s organization Hellsing. He recruits an officer named Seras and turns her into his vampire lackey. With Seras’s help, Alucard plans to defeat anyone who dares oppose his master’s organization.

Vash and Alucard come from different walks of life and have different personalities. However, these two aren’t slackers when it comes to delivering epic gun-wielding action. While Hellsing Ultimate’s a little gorier and lacks a funny bone, fans will adore seeing Alucard wipe out his foes with his vampire and gunslinging skills.

At the same time, this show delivers decent storytelling and gradually explains Alucard’s past endeavors before joining the Hellsing organization. Most characters feel developed, unique, and enjoyable and never overstay their welcome. Though lacking an intricate narrative, it promises enough carnage, quirkiness, and exhilarating emotions that it’d be hard to pass up a quick watch.

Cannon Busters is a Netflix Anime series that adopts a lot of elements from shows like Cowboy Bebop and Trigun. It features a well-developed narrative, fun characters, and enough action to keep folks entertained. This story is split into 12 episodes and follows the adventures of two robots and a deadly fugitive.

Like Vash, the characters in this series will be chased down by multiple mercenaries and assassins. The anime gradually fleshes out the history of our crew and focuses on their main objective involving the heir of a powerful kingdom. This anime features a great mix of humor and action to keep things afloat.

Viewers will find the show’s world-building impressive. Visually, the anime looks great from an animation standpoint. Furthermore, the characters all have interesting quirks to help them stand out. If you’re looking for a fun action-packed anime with enough adventure components to keep you hooked.

You can read our thoughts on Cannon Busters in our full-season review here!

City Hunter is a quirky yet enjoyable crime anime with a stellar protagonist and funny dialogue. While the show offers more realistic traits as opposed to Trigun, its protagonist Ryo has sharp gunmen skills that feel supernatural.

If you enjoyed Trigun’s storytelling, don’t expect City Hunter to deliver a groundbreaking narrative. It’s story feels slightly more episodic. However, fans shouldn’t write off this anime for not having a captivating tale. The content itself will impress and please those who enjoy self-contained narratives.

Ryo has a colorful personality and feels more comical than Vash because of his obsession with women. He’ll endure many dangerous outcomes and deliver a worthwhile beat down to criminals who challenge him. The other characters in the series are complex and leave a great impression.

If you’re okay with episodic series, check out City Hunter.

From episodic to more story-centric, we arrive at Black Lagoon. This anime delivers an impeccable world where violence and breaking the law feel like the norm. With its action-packed characters, fun gun battles, and memorable storyline, this anime packs a wallop.

The story centers around Rokurou, a salaryman who gets inducted into the Lagoon Company’s pirate syndicate during a failed business negotiation scheme. As a member, Rokurou must live amongst them in the corruptive and crime-filled city of Roanapur and work together with his new gunslinging co-worker, Revy.

Like Vash, Rokurou feels opposed to violence. As the series progresses, so will his relationship with Revy and the Lagoon Company’s other members. The villains they come across are formidable and will stop at nothing to defeat them.

Every character in this anime has a story to tell and a reason as to why they live a life of crime and punishment. The action scenes in this anime look great. Fans will feel their heart pumping as our characters dodge and outmaneuver their foes with their incredible gun-wielding skills. If you’re looking for an intense anime about crime syndicates duking it out for money and power, check out Black Lagoon.