This recap of Scenes from a Marriage episode 5, “In the Middle of the Night, in a Dark House, Somewhere in the World”, contains spoilers.

One. That’s how many good episodes, out of five, HBO’s Scenes from a Marriage redo managed to provide. And it’s surprising when you think about it. The source material is legendary, Jessica Chastain and Oscar Isaac were consistently great in this version, and there was just a sense of high-quality, prestige television surrounding the whole endeavour. But, to use a rather pretentious critical term, it sucked. The core relationship was flimsy, built on artificial foundations, and while it managed to build some actual narrative momentum for an hour, it wasn’t able to sustain it through “In the Middle of the Night, in a Dark House, Somewhere in the World”, a shrugging finale that doesn’t bring us much closer to a meaningful resolution – much less a point – than any of the previous outings did. 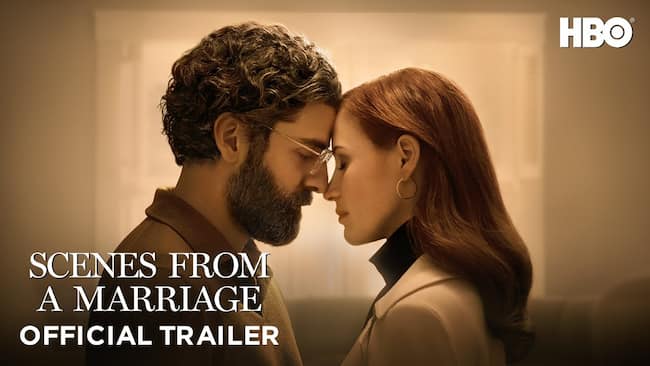 Scenes from a Marriage

Scenes from a Marriage episode 5 recap

Four years on, Jonathan and Mira are happy without each other, and unhappy with each other, although it might just as easily be the other way around – neither of them seems able to tell, which might be why they keep meeting up for regular affairs, either to try and rekindle what they once had or lament what they don’t have currently. Jonathan rushes from his father’s funeral, and Mira rushes from lunch with Poli, to meet each other. They eat pizza and have sex – much less vindictively than they did last week – and talk in circles for what seems like forever. They might as well still be married.

Then again, there’s no wonder things didn’t work out between them, because Jonathan is absolutely bonkers. In what he perceives as a romantic gesture, he rents out their old house on Airbnb so they can spend the night there, just like the good old days when they slapped each other in the hallway and signed their divorce papers on the floor. They both roam around the place like they’re paranormal investigators exploring a haunted house. The episode keeps feinting as though it’s building towards something momentous, and it never quite gets there.

Virtually all of these episodes have followed the same format; Jonathan and Mira act as if things are normal, and then one too many barbed remarks or suspicious behaviors sets them off. We assume that might happen here. Jonathan feigns an asthma attack and hides in a downstairs bathroom to video call his wife and young son, but when he goes back upstairs it turns out Mira already knew about both of them. The point of this is to establish how Jonathan has changed. Now, the sexual repression that Mira always hated about him has morphed into needs he can’t control, and that his sexless new marriage isn’t meeting. Mira is only one of several infidelities. He has resigned himself to the fact that he isn’t a good guy, so he’s no longer trying to be. He doesn’t feel guilty about what he’s doing. Instead, he feels a profound sense of waste, knowing that he’ll never love anyone the way he loved Mira, but that now he can’t even love Mira the way he once did.

The house is a metaphor for all of this. It has been updated and refurbished, made lighter and more modern. Happier, in its way. When Mira and Jonathan break into the attic that they debated remodeling but never got around to, they discover it has been turned into a teenage girl’s bedroom. All it took, the episode seems to say, is the two of them separating for the house to reach its full potential, like they were the ones holding it back. They dance among the girl’s things and have tender sex in her bed, and in the manner of a child, Jonathan wakes up suddenly from a nightmare. He fears that perhaps now he can’t love or be loved, and Mira consoles him with the idea that the love they share, however dysfunctional and complicated, is real enough for them both. It’s not much consolation, really.

Scenes from a Marriage ending

“In the Middle of the Night, in a Dark House, Somewhere in the World” ends with a flurry of self-referential, fourth-wall-breaking navel-gazing claptrap; Mira’s evocation of the title line, a facepalm-inducing moment that almost saw me throw my laptop through the window, and a return to that insufferable gimmick of exposing the artifice of the story by keeping the camera rolling after the shoot wraps, as we see Jessica Chastain and Oscar Isaac, now out of character, clamber out of a child’s bed and walk hand in hand to their dressing rooms. I suppose it’s fitting, in a way, since these two have shouldered the entire responsibility of keeping Scenes from a Marriage watchable in lieu of a script that knew how to unpack the nuance they were displaying. By putting the focus on the actors, not their characters, we’re reminded that this was all an illusion, a play, as fleeting and transient and meaningless as the bad dream that woke Jonathan up from his self-loathing slumber. It’s rare for art to tell you outright that it’s meaningless. At least in this case it’s right.