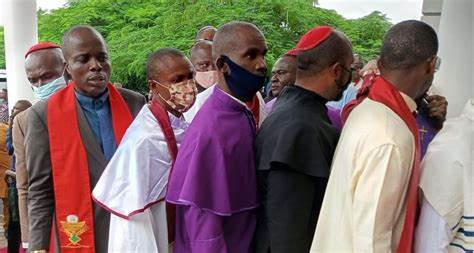 The controversial bishops who attended the unveiling of the Vice Presidential Candidate of All Progressives Congress, Senator Kashim Shettima, have reacted to the controversy that their attendance at the political event caused.

Speaking at Shehu Musa Yar’Adua Centre on Monday July 25, the Bishops who denied being sponsored by the ruling party and APC Presidential Candidate, Asiwaju Bola Tinubu, presented “proof” of their ministries and ordination certificates.

Commenting on authenticity of their churches, they gave out some of the names as Christian Revival Evangelical Mission Worldwide, founded by Apostle Godwin Livinus, Divine Prophetic End Time Gospel Faith in Kubwa, a shepherd by Bishop Dr. Emeka Theodore, and the Light House of all Nation Ministry, which has Bishop Emmanuel Sunday Jayeola as General Overseer among others.

Secretary of the group, Adams Abel King who dismissed claims of being sponsored to impersonate leaders of the Christian Association of Nigeria at the event, also said that they never claimed to represent CAN or portray themselves as CAN emissaries.

“We never claimed to represent CAN or portray ourselves as their emissaries.

“Although Senator Kashim Shettima took the mantle of the state at a difficult time marked by terror attacks and deadly insurgency, his mature, cautious, and decisive management of the state’s affairs helped preserved the social fabric that held several communities together and reassured members of the Christian faith that the government remained committed to their freedoms and wellbeing.

“His (Shettima) rebuilding efforts targeted at the Christian community, including the reconstruction of churches affected by terrorist activities.”