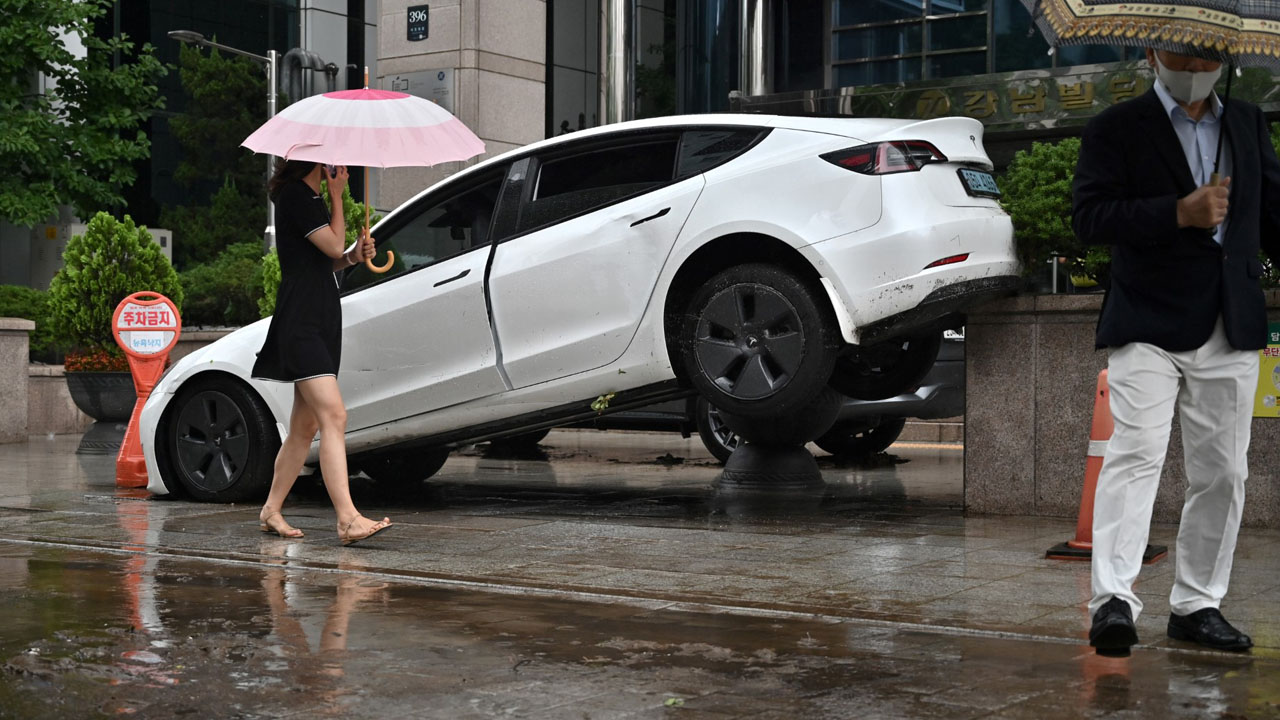 Authorities warned there was more rain to come even as emergency workers struggled to clear the hulks of flooded cars, which AFP reporters saw strewn across major intersections throughout the city.

The downpour that began Monday is the heaviest rainfall in South Korea in 80 years, according to Seoul’s Yonhap News Agency.

“At least seven people died in the Seoul metropolitan area, while seven others are missing, due to heavy rain,” an official at Seoul’s interior ministry told AFP.

Local reports said three people living in a banjiha — cramped basement flats of the kind made famous in Bong Joon-ho’s Oscar-winning “Parasite” — including a teenager, died as their apartment was inundated by floodwaters.

“The government must review the current disaster management system from square one, given that abnormal weather caused by climate change is becoming a part of everyday life,” he said.

“We should respond all out until the situation is over in order to protect the precious people’s lives and property and take steps until the end, until the people feel that they are enough.”

But Yoon, who has seen his approval rating plummet to just 24 percent since taking office in May, according to the latest Gallup Korea poll, was facing online criticism for failing to go to the government’s emergency control center late Monday.

Local media reported his absence was due to flooding in his area, but Yoon’s office denied that was a factor, saying he had decided to stay home as his team, including the prime minister, already had the response in hand.

Yoon still lives in his pre-election accommodation, having declined to move into the presidential Blue House, which he has decried as “imperial” and opened to the public as a park.

“Why did you leave the Blue House” became a trending topic online, as netizens shared videos purportedly showing flooding at his residence alongside mocking comments.

“Gangnam is said to be the centre of the economy and well developed, but it is ironic that it is so vulnerable to natural disasters,” 45-year-old office worker Moon Yong-chun told AFP as he tried to rescue his car from a flooded car park.

“I am shocked by the damage. The same thing happened around 11 years ago, and it is sad that the government has not taken any measures,” he added.

The Korea Meteorological Administration warned South Koreans to “be careful of the heavy rain, gusts, as well as thunder and lightning in the central region” for the next few days.

The KMA also said that up to 300 more millimetres of rain was forecast for the central region that includes Seoul through Thursday.

Power outages were also reported across the capital late Monday, while some operation of the Seoul metro and railway services was temporarily disrupted by the heavy rain.

Hiking trails at many of the country’s national parks were closed and passenger ferry routes, including from Incheon port, were suspended.