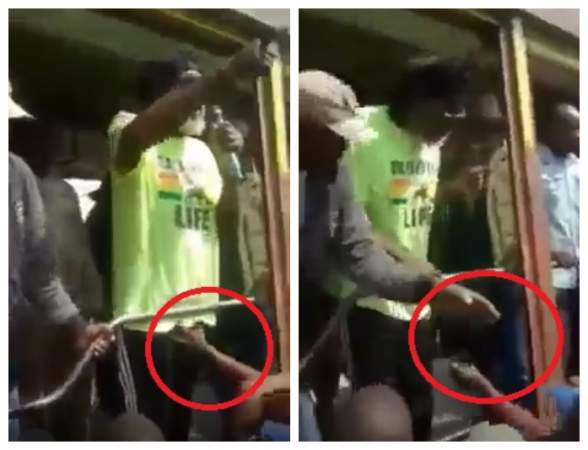 Local news platforms reported that this occurred while the Kenyan presidential candidate was mobbed by a crowd as he campaigned on the back of a truck.

The controversial presidential candidate was selling his agenda before a woman in the crowd violently grabbed his private parts forcing him to react.

The Roots party flagbearer jumped back, while his security detail also swung into action, forcing the woman to quickly withdraw her hand.

“Usinishike hivyo (Don’t touch me like that),” Wajackoyah bitterly complained after the randy woman grabbed his private parts.

The controversial politician however laughed off the sexual assault only seconds later after the attacker withdrew her hands from his privates.

“Sasa huyu ananishika sehemu yangu ya nyeti (Now this one is grabbing my private parts),” Wajackoyah told the crowd amid laughter.

Watch the video below….

A thirsty #Wajackoyah female fan decided to put his slogan of TINGIZA MITI into action by SHAKING the owner of the slogans “miti” YAWA!!??#kapsabet pic.twitter.com/6uzxTscbrC