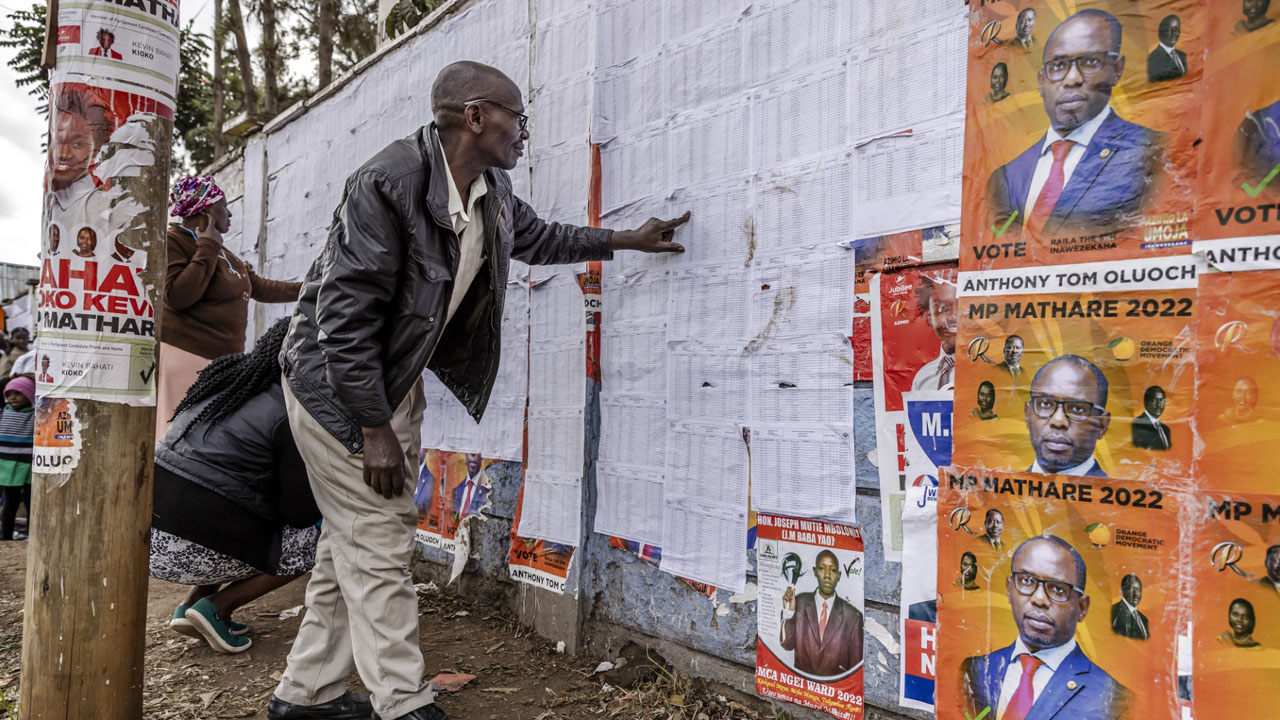 Kenyans braced for Tuesday’s high-stakes election, as millions prepared to vote for a new president in a tight race between Deputy President William Ruto and Raila Odinga, a veteran opposition leader now backed by the ruling party.

With the spectre of post-election unrest looming over the polls, many welcomed a final pledge by both men on Sunday to respect the result and not trigger a repeat of the violence that followed votes in 2007 and 2017.

The campaign has been dominated by mudslinging and fake rigging claims, but both candidates made a pointed effort to call for a peaceful vote at separate church services in the Kenyan capital Nairobi on Sunday.

“Each Kenyan wherever you are, whatever you do, be a peacemaker. It is a qualification to become a son and a daughter of God,” Ruto said.

The 55-year-old has previously said he will pursue any dispute at the Supreme Court, which in 2017 ordered a rerun of the presidential vote, citing irregularities in the counting process and mismanagement by the electoral commission.

No Kenyan presidential election has gone unchallenged in the last 20 years and the discord has previously led to violence, either between communities or at the hands of the police.

Odinga — who is making his fifth run at the presidency — also urged calm, saying: “We want a peaceful country, that no life should be lost at the hands of no other person.”

In an editorial published Monday, the Daily Nation newspaper welcomed the “good signals” from the two men, saying it would “help to ease tension”.

With lawyers David Mwaura and George Wajackoyah — an eccentric former spy who wants to legalise marijuana — also in the fray, speculation has mounted that Kenya may see its first presidential run-off.

But in recent days, analysts have suggested that Odinga, 77, will likely scrape past Ruto, with Oxford Economics highlighting the fact that he is backed by “several influential political leaders”, including President Uhuru Kenyatta.

“A final poll giving him (Odinga) an 8% lead will encourage undecided swing voters to pick the winning side,” Ben Hunter, Africa analyst at risk intelligence company Verisk Maplecroft, said in a note.

– Stable democracy –
Ruto was long expected to succeed Kenyatta, but was sidelined after his boss — who cannot run again — shook hands with longtime foe Odinga in a 2018 pact that stunned the nation.

Since then, Ruto, a wealthy businessman with a rags-to-riches background, has vowed to overthrow the “dynasties” running Kenya — a reference to the Kenyatta and Odinga families, which gave the country its first president and vice president.

Ruto has presented himself as “hustler in chief”, claiming to speak for the downtrodden and hoping to strike a chord in a country where three in 10 people live on less than $1.90 a day, according to the World Bank.

In his final campaign speech on Saturday, Odinga vowed to continue with the “handshake doctrine”.

The election is being closely watched by the international community, which views Kenya as a stable partner in a region roiled by conflict.

“The August 9 election represents an opportunity for Kenyans to showcase for the world the strength of Kenya’s democracy by conducting free, fair, and peaceful elections,” the new US ambassador to Nairobi, Meg Whitman, said on Twitter.