JUST-IN: Nigeria crash out as Morocco set up final clash with S/Africa 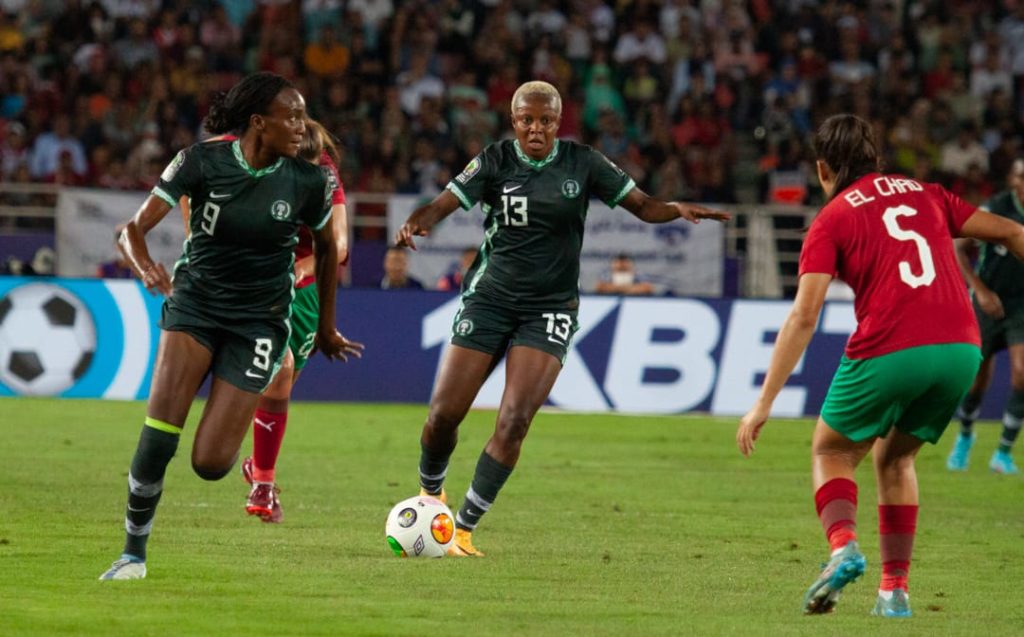 Morocco sealed their place in the final of the 2022 Women’s Africa Cup of Nations with a penalty shootout victory over defending champions Nigeria in Rabat on Monday but made heavy weather of it after having a two player advantage for 50 minutes.

The semifinal ended 1-1 after extra-time before the host nation claimed the penalty shootout when Nigerian forward Ifeoma Onumonu had her effort saved by home goalkeeper Khadija Er-Rmichi.

Morocco will now face South Africa in the final on Saturday, with both nations seeking a first win in the competition, while Nigeria take on Zambia for the bronze medal on Friday.

Nigeria received two red cards in their semifinal, though they could have had little complaints over either, and should have been dead and buried long before penalties as Morocco spurned numerous simple chances to score.

The first half ended goalless as Nigeria camped in the Moroccan half and mounted wave after wave of attack but were let down by their final ball.

The best chance came from a mistake in the home defence as they dallied on the ball and when Er-Rmichi had to hurry her clearance, the ball fell to Christy Ucheibe.

She had time to pick her spot with an empty net gaping but put her shot wide of the mark with a disappointing finish.

Nigeria were dealt a blow minutes into the second half when Halimatu Ayinde’s ugly stamp on the ankle of Rosella Ayane was fully deserving of a red card, the only surprise perhaps that it needed the Video Assistant Referee to make the decision.

Morocco had a shot cleared off the line after that as Nigeria suddenly looked rattled.

But it was the Super Falcons who took the lead on 62 minutes in fairly comical circumstances.

Rasheedat Ajibade’s cross was headed goalwards by Onumonu but the ball rebounded off the post. Uchenna Kanu looked set to pounce on the loose ball, but as Morocco defender Hanane Aït El Haj tried to clear the ball, she succeeded only in kicking it into the face of teammate Yasmin Mrabet and the ball ended up in the back of the net.

But that lead lasted only four minutes before the home side hit back to send the crowd into delirium.

Ayane broke down the right-hand side and when her low cross was not collected cleanly by Nigerian goalkeeper Chiamaka Nnadozie, Sanaâ Mssoudy turned home the loose ball.

Nigeria lost another player to a red card with 20 minutes remaining as Ajibade was the guilty culprit this time, her reckless tackle deserving of the sanction.

SCENES: The Super Falcons of Nigeria have been reduced to nine players following a second red card of the match.

Captain Ghizlane Chebbak should have won it for her side in injury-time at the end of the game when she danced past a couple of defenders and had only Nnadozie to beat, but blasted wide.

Morocco created numerous opportunities to win the game but their finishing was weak, and it was in fact Nigeria who came closest as Gift Monday rattled the crossbar with a thunderous shot in the second half of extra-time.