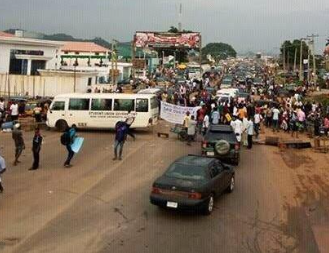 Daily Trust reports that the said explosion actually took place around the premises of the office of the Secretary to Kogi State Government, Ministry of Women Affairs and Ministry of Chieftaincy Affairs. The explosion which made workers and many residents scamper for safety happened around 8.30 am when workers were resuming in their various offices and shop owners were out to open their shops for daily business.

Eyewitnesses say an object like a bomb was sighted around the Ministry of Local Government and Chieftaincy Affairs which has in its opposite and adjacent, offices of the secretary to the state government and Ministry of Chieftaincy Affairs, including the newly completed Muhammadu Buhari event centre that is awaiting Commission at the far opposite.

“Yes, what happened was, we were informed of a package that looked like a bomb, left on the premises and I immediately, deployed the bomb disposal unit there to assess the object.

The object was immediately blown up, the explosion you heard was the handwork of our bomb disposing unit brought about by their efforts to blow up the object.”

He added that an investigation has commenced to ascertain the character of the object to measure the motive behind its presence in the areas.