As a Catholic, Iâm proud to lead APCâs Muslim-Muslim ticket. The Pope has not told me I am wrong – Gov Lalong 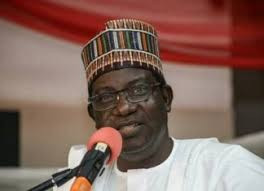 Plateau state governor, Simon Lalong, has said that as a staunch Catholic, he is proud to lead the Muslim-Muslim presidential ticket campaign of the APC.

The governor who is the Director-General of the APC Presidential campaign team, said this while fielding questions from State House reporters after a closed-door with President Muhammadu Buhari at the Presidential Villa, Abuja today August 10.

He said as a born, baptised, and confirmed Catholic, who has the highest award from the papacy, Knight of Saint Gregory the Great, the Pope has not told him that it is wrong for him to lead the Muslim-Muslim presidential campaign team.

According to the governor, the Pleateau State Chapter of the Christian Association of Nigeria (CAN) came to the Yakubu Gowon Airport, Jos, to welcome him after his appointment as the APC presidential campaign DG.

He stated that he is not sure why those who claim to be Christians are opposed to his appointment.

The governor, who flayed some Christian leaders asking him to reject the appointment because of the condemnations that trailed the APC Muslim-Muslim ticket, said the selection was strictly a party affair and had nothing to do with religion.