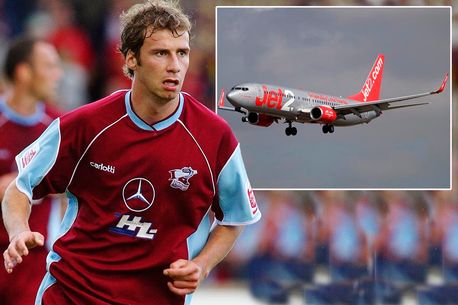 Former Middlesbrough, Lincoln, Scunthorpe and Barnsley player Richard Kell decided to make a drastic career change when a double leg fracture ended his football career. Unlike many who would rather settle for coaching or jobs on television as analysts, Kell opted to head for the skies.

Retiring at the age of 27, the former Middlesbrough midfielder who equally played for Torquay, Scunthorpe and Barnsley decided after calling it a day after 10 years playing football that flying would be it!

The journey began when Kell saw his career end during a match between Scunthorpe and Bristol Rovers where he suffered a cruel double leg fracture. Iron manager Brian Laws said at the time: “The injury has destroyed the day. I am gutted to have lost such a talented player.”

While recovering from his injury between 2001 and 2004, Kell had a change of heart over what he wanted to do with his life. A chat with a pilot while the squad prepared to jet off for a pre-season tour opened him up to another world of possibilities.

In 2016, Kell said: “On my return, I went to my nearest airport [Humberside] to make my initial enquiries. I had completed about 10-15 hours training, however my fitness returned, I signed a new contract and my pilots training was put on the ‘back burner’ for a time.

“Football gave me interpersonal skills. Being confined within the ‘tin box’ of a cockpit at 35,000 feet means that I must be appreciative of my co-pilots and other crew, who I have to interact with.

“Finally, I was a fairly technical player so my overall touch and hand/ eye coordination is a great attribute to have as a pilot, helping me instinctively know when to apply power and rudder.”

Kell, who never made an appearance for Middlesbrough but played 81 times for Scunthorpe, has gone on to obtain a commercial pilot’s license, now working for airline company Jet2 at Leeds Bradford Airport (LBA). However, the ex-midfield star has insisted that becoming a pilot is as hard as trying to make it in football.

He added: “My chosen career was every bit as hard to get into as football and can be equally as competitive. However, if I had failed to gain my commercial pilot license I could still have gone and done something more mainstream and familiar. “I didn’t want any niggling doubts or ‘what ifs’ later in life.”