At Asad’s office, Asad who has just come to the office reprimnads the employees gossiping about zoya and eneters his cabin.He is told be the secretary that the delegates that were supposed to come in the evening came early.

They were trying his phone but he didnt pick and hence after waiting for half an hour they left angrily and looks like cancelled the deal too.Asad is very angry to hear this. 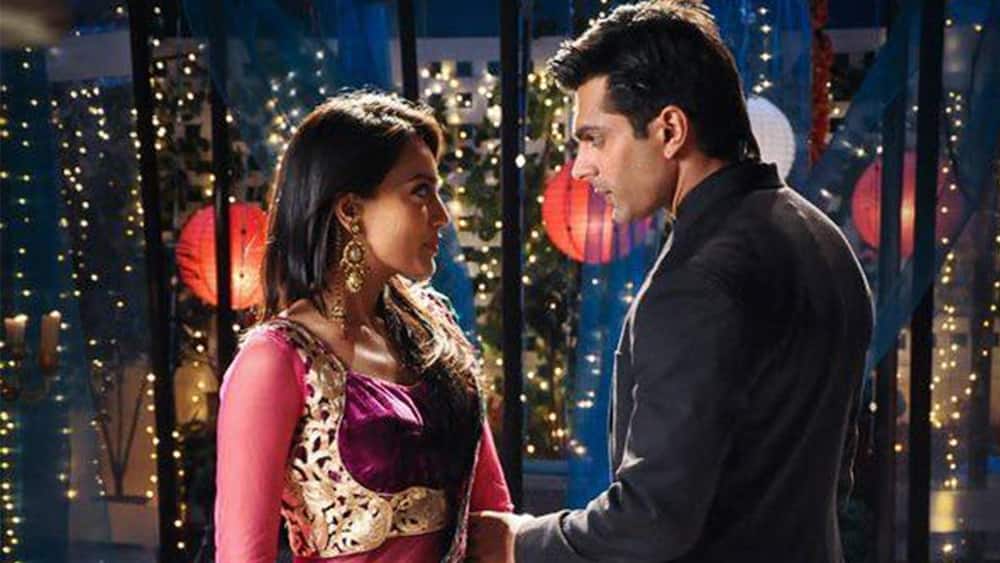 I DO on zee world

At Asad’s residence, Asad comes angrily to zoya and confronts her saying that she would have to correct his phone settings now.She says as she said,she would only when he learns his lesson.She is about to leave,but he stops her with his hand on the wall.Saying that he isnt finished talking to her yet,when she says she is,he stops her by putting the other hand on the wall cornering her in the middle.She is told by him to change the password.
when she asks what would he do if she doesnt,he stares down at her in anger.He leaves without saying a word and then turns around and throws the phone on the wall behind zoya and breaks it and leaves.Zoya is shocked to see this.

In the night,she goes to asad’s room to talk but he stops her with his ahnd and shuts the door on her face.Sitting in his room,he comes to the window and gets a parcel sent to him via a rope with a card saying that she has repaired his phone and its working too so he kindly keep it.

At Ayan’s residence, imran is about to leave aftre showing the wedding card to shirin and razia when ayan on the pretext of him being a computer wizard and some problem in ayan’s laptop,takes towards their room where they find some time to chat and nikhat too shyly comes out to mix with them.they share awkward romantic glances without actually saying anything.they aftre asking certain questions include imran into their gang and he too mockingly says its a matter of great respect for him.He then goes to say that he too has heard much about ayan’s flirting nature thus sparking off a debate on love whereas in asad’s house,a diehard romantic zoya is checking out her sunsign,piesces’ hororscope and is very excited to find that it says her lover is going to treat her like a princess.

Ayan who is a sagittarius says that he hs comes to keep the hearts of every girl and spread love in his poetic style.he says that he wont be hitched rather he wants girls to swoon over him.humaira silently wishes that he falls for her.

Zoya on the other hand,a hopeless romantic assk for dilshad’s sunsign and tells her that for capricorn people it says that they would be wooed and courted by the true love of their life sending her into past memories of rashid.Nazma sensing her sadness,tells her that hr children are the true love of her life.Just then,Asad enters and knowing from nazma that his sunsign is leo,zoya goes on to find his horoscope saying that the person would find peace calm and love in his life,despite asad saying he doesnt believe in it.she says that she desperately hopes to fall in love as its the best feeling in the world and also gets dilshad to back her motion.asad says it might be,but its not meant for him.He gets up to leave,then pauses and dismantles the tape stuck mobile and keeps it on the table beside zoya and leaves.Nazma and dilshad are upset to see such anger.

Zoya too comments that he doesnt need love,but therapy.

At a Cafe, while ayan cant stop talkign about zoya while waiting with humaira to meet heer,she is trying her best to keep ayan busy,but he almost catches her when she pretends to talk to zoya and the phone rings in the middle of the call.She makes an excuse for getting coffee and avoids talking to him.But ayan understands that something is up.When humaira returns with coffee,she finds ayan with another girl,who he introduces to her as zoya.since she has not met zoya,she falls for his trick and says that indeed she was zoya.but ayan catches her red handed lying about knowng zoya and she is rendered speechless.

Back to Ayan’s residence, Rashid thinking that dilshad did not call even after getting the messsage on the radio,decides to call her himself.His call doesnt get through,but razia watches him impatiently calling somebody and gets suspicious.When his mother calls him to get her medicines and rashid leaves and forgets the phone on the table,razia takes this oppurtunity to check his phone.

Ayan is extremely angry at humaira for lying to him.when she says its a prank,he says that it in fact hurt his feelings and he shouldnt have played with it.He says bitterly that if she wanted to she could have played a prank like he did at the fashion show,when he commented that she was looking beautiful when in fact she was looking horrible and leaves her there hurt.she is wondering how could she say to him that the reason she got him here on zoya’s pretext ws to spend some alone time with him.

while zoya is making nazma do crunches for her weight issues,in dilshad’s presence,her artificial plait falls off and dilshad is shocked but before she can respond,they hear asad coming towards them and are horrified that he would blow his top seeing nazzma like this.They stop him at a distance from the sofa,underneath which nazmaa is hiding and listen to his complaint stopping him everytime he moves forward.dilshad tries to send him to get ready,he is surprised to hear that since he already is.Sensing their confusion and scare,he realises they are upto something.The screen freezes on his face.

Asad is confused at their strange behaviour but leaves nevertheless informing them that the painter would come to paint walls.Nazma somehow hides her short hair from asad.

Razia takes rashid’s phone to shirin working in the kitchen,and expresses her doubt of rashid calling dilshad again.They are concerned.They begin to call the no and find out but then decide to note it down and match the no with the one shirin has.She writes down the no on the kitchen slab and they leave to get shirrin’s phone to check the no.Meanwhile razia surreptitiously keeps the phone on the table where rashid left itt and leaves.he however notices flour stains on the phone and a thought crosses his mind.He goes to the kitchen and is shocked to find dilshad’s no written on the slab.

Razia and shirin are also approcahing towards the kitchen with the phone.Rashid immediately edits the last two digits and is halfway out when he collides with shirin and razia and makes an excuse that he came in for some lemonade.When he leaves,they match the nos and where shirin is relieved and happy to find its not dilshad’s no,razia is confused and unconvinced.

While nazma in her restlessness,throws the wig accidentally in the paint can,asda enters and zoya promptly covers nazma’s head with a dupatta so that asad doesnt notice.But just then,The painter comes and gives in the paint stained wig saying that it fell from the window.The ladies are scared to see and asad demands to know whose wig is it.Finally nazma gathers the courage o admit her mistake and the fact that she lied and aplogizes.dilshad tries to justify that its not her fault,asad too agrees saying that its somebody else’s fault pointing at zoya saying that she taught nazma to lie and hide things from her brother,as he saw how she draped and coverd nazma’s head when he walked in.Zoya defends them saying they wanted to avoid his anger hence the lie.When asad asked did she think,he would never know,

she says yes saying that they thought her hair would grow back till he finds out and he wont know the difference.She reprimands him for being so arrogant that he’s angry when lied to and also when told the truth.He behaves like a robot and if a faultless person is like him,then she wishes that every person has a fault.He calls her impossible and leaves.she too calls him the same behind his back.

Nikhat and nuzrat are upset when ayan who had gone with humaira returns alone and in a bad mood spewing anger at her and telling them about her lie.

Shirin hugs rashid and apologizes for doubting him when he had clearly promised her that he wont call again.still her doubts got the better of her.She asks him to come early so that they can enjoy the meteor shower and wish together.He agrees.

nikhat interrupts ayan from his playing guitar and tells him that humaira is not picking up hr phone and also hasnt returned and she has never been out after 7’o’clock in the evening.Ayan carelessly says that she’s not a child and would definitely find her way home but somewhere he too is concerned to hear that.

Dilshad and nazma too are in tension as zoya’s call is not getting through and she is out.when asad doesnt care much knwing its her habit to flaunt rules,he is told by nazma that she told zoya to go to hilltop garden for the best view of meteor shower and dint tell her that the raod gets stranded in the evening.reluctantly asad goes to get her.

Ayan is troubled for humaira when she doesnt pick her phone but is delighted to find her on the swing where she goes whenever she fights with ayan.he gets her into a good mood and ask her to return home.But as ayan progresses,she has a headache and falls on the ground unconscious.ayan turns around and screams in shock to se her like tht.

Asad meets zoya at th hilltop garden and tells her to go home with her as dilshad is waiting.she refuses saying that she would come herself after the shower and he can leave if he wants to.He turrns to go but then again frustratedly resigns herself to sticking with her.

while everybody is waiting for the meteor shower,they all make their respective wishes in their hearts.
Asad finally loses his cool and tells her to leave right now with him,since dilshad is getting worried.She asks him to stop pointing his finger at her and to lower his tone,since she can shout with double the volume if she wants to.She tells him not to worry about her which prompts her to say that this is not her ny prompting her to say in return that she too thinks the same,and that his real problem is personal and not because he cares about mannerisms.

She tells him tht she would leave with him,not because he wants,but because dilshad would be worried.Seeing his attitude, zoya wishes that he falls for a girl who is carefree and above his restrictions and rules and is open minded and liberal,he wishes that she gets a man,who will size her down,teach her some manners and impose the necessary restrictions on her.She also asks him, not to judge her.Juts then,She slips on her feet and falls into his arms who holds them out for her lest she falls.they share a romantic eyelock while the meteor shower happens right then.

While in their rooms,they both are having thoughts about each other.And both are reprimanding themselves for the same.Finally distracting themselves from thinking about the other,they fall off to sleep. Keep visiting blastersseries.com for fastest updates.