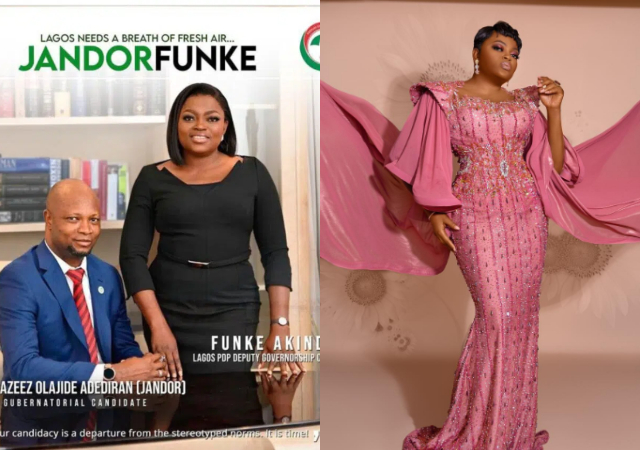 Since Funke Akindele emerged as the running mate to Jandor, the governorship candidate of the Peoples Democratic Party (PDP) in Lagos State, many of her colleagues in the movie industry have distanced themselves from her political ambition.

None of her colleagues, not even her off-and-on bosom friend, Eniola Badmus has posted Funke Akindele’s political ambition on their Instagram pages, nor campaigned for her.

Leaving Funke Akindele to stand alone in her campaigns without any help from the entertainment industry, the majority of them chose to pitch their tents with the ruling party in Lagos State All Progressives Congress (APC).

Some of the reasons why Funke Akindele has been left alone have now been unveiled by City People.

Some of the reasons why Funke Akindele’s colleagues abandoned her

One, she is from the Yoruba genre of the industry but she rarely features in Yoruba movies. She concentrates only on her personal projects and English genre movies.

Also, the competition among the movie stars would not allow them to support one another’s political ambitions.

Observers noted that Funke Akindele has always been a lone minder, who doesn’t keep friends in the industry. Whatever relationship she has with anyone in the industry is purely professional.

Also, Funke Akindele doesn’t associate with most of her colleagues, especially those in the Yoruba genre of the industry. She hardly attends their events. She doesn’t invite them to hers either.

Interestingly, she is a product of the Odunfa Caucus, an association that is rated strongest in the Yoruba movie industry and an Odunfa Caucus’s endorsement alone would have helped boost her political ambition, but the caucus has kept mute on her issue.

The reason is that she doesn’t attend their events or associate with them. Even when the founders are celebrating birthdays, she doesn’t honor them with her presence.

Though, it was learned that Funke Akindele often reaches out to her colleagues in times of trouble and supports them financially. For example, she contributed to Kemi Afolabi’s fund for treatment.

She took care of and paid the medical bills of Bimbo Success when she was sick, and so many other cases like that.