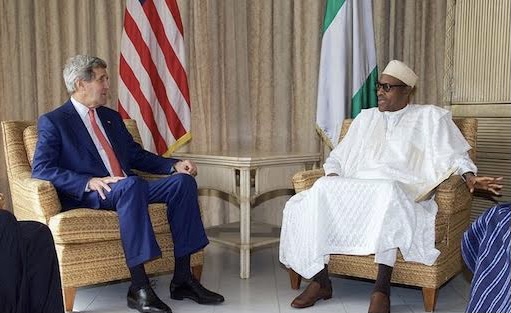 United States Special Envoy on Climate Change, John Kerry, says it is imperative that Nigeria tags along the global energy transition goals which seeks to cut out fossil fuel emissions by 2050.

Nigeria depends on its vast deposits of crude and gas for revenue and industrialisation.

But Mr Kerry says the U.S does not want Nigeria to cause set back with its support for fossil fuel refineries.

“What we don’t want to have to happen is that Nigeria and other countries make a decision that they’re going to build out a capacity infrastructure that is going to undo what we’re trying to do and set us back. Now, we had a huge amount of agreement in our conversation,” he said.

Mr Kerry, a former U.S. Secretary of State met Minister of State for Petroleum, Timipre Sylva, in Abuja on Tuesday. At the meeting, Mr Kerry disclosed that his government has “put $12 billion on the table” to help cushion the adaptation challenges and mitigate the immediate impacts of the climate crisis.

The visit was in line with article 9 of the Paris Agreement, to which Nigeria is a signatory. The article obligates developed country parties to provide financial resources to assist developing country parties with respect to both mitigation and adaptation in continuation of their existing obligations under the Convention.

Despite Nigeria’s commitments to energy transition, the federal government has given the Dangote refinery an operating license to generate fossil fuel. Mr Kerry says these emissions “from Nigeria or anywhere in the world would affect Mother Earth.”

Although sub-Saharan Africa is at a major receiving end of the climate crisis, it is only responsible for 0.55 per cent of world emissions. Climate change analysts have said that Africa has to be allowed a more relaxed obligation to meet net zero by 2050 due to its underdevelopment and poverty crisis. Mr Kerry says Nigeria has 10 years to harmonise its development plan with the transition process, but its effort by the end of the period has to be clear.

“The minister made it very clear to me that Nigeria intends to be thoughtful about these 10 years. But beyond that, realising that we have this cushion here, we have a few years during which gas will be part of the transition. No question.

“But after you get past those 10 years or so, everyone is going to have to be on a glide path where you’re reducing emissions, because otherwise, we can’t reach net-zero by 2050,” he said.