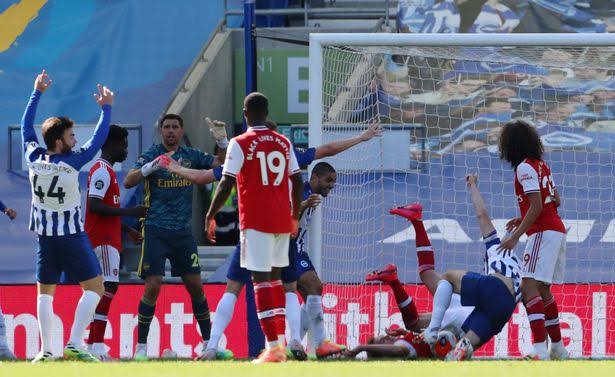 Arsenal’s challenge to return to the Champions League next season faltered once more as Neal Maupay’s 95th minute winner handed Brighton a vital 2-1 win in their battle to beat the drop.

Nicolas Pepe’s stunning strike gave the visitors a deserved lead at the Amex, but the Gunners defensive problems reared their head again as Lewis Dunk bundled home from a short corner.

Maupay had angered the Arsenal players for his part in a serious injury suffered by goalkeeper Bernd Leno in the first half.

And the Frenchman rubbed salt into those wounds with a fine finish deep into stoppage time to snatch all three points.

A second defeat in four days leaves Arsenal still eight points outside the top four in ninth, having played a game more than fourth-placed Chelsea.

A first league win of 2020 takes Brighton five points clear of the drop zone in 15th.

ALSO READ >>  Magu is not above investigation - Presidency

In keeping with all matches since the Premier League’s restart on Wednesday, players took a knee prior to kick-off to protest against racial injustice.

However, slow starts have also been a feature of the first six games after a three-month layoff and again both sides struggled to adapt to the hollow atmosphere of empty stands.

Arsenal had the upper hand of a game under their belts albeit a 3-0 thrashing at the hands of Manchester City on Wednesday.

Coach Mikel Arteta made five changes from midweek, but there was still no place for Mesut Ozil.

Teenager Bukayo Saka retained his place and nearly made a big impact by crashing a shot off the crossbar in the closest either team came to breaking the deadlock before half-time.

However, just as against City when Granit Xhaka and Pablo Mari hobbled off early on, Arsenal had to cope with a serious injury setback when Leno was stretchered off after twisting his knee following a push from Maupay.

The German has been one of Arsenal’s few standout performers this season and was visibly furious with the Brighton striker as he was carried from the field.

Leno’s understudy Emiliano Martinez showed no signs of nerves as he was immediately forced into a fine save from Aaron Mooy low to his right.

Brighton were one of the Premier League clubs to fight strongly to maintain home advantage rather than play at neutral venues, but there was little sign of them enjoying home comforts as Arsenal continued to pose the bigger threat after the break.

Pierre-Emerick Aubameyang was twice denied by Mathew Ryan and the offside flag when he did find the net as VAR confirmed the Arsenal skipper was millimetres beyond the last defender.

Pepe provided the moment of magic it seemed the visitors required to secure all three points when he cut onto his favoured left foot and curled just his fifth Premier League goal into the top corner.

However, the defensive deficiencies that have haunted Arsenal’s season under three different managers have not been ironed out during the three-month layoff as they switched off from a short corner.

Solly March was given time to drive in a low cross and Dunk forced the ball over the line.

Worse was to come for Arteta as Maupay was quickest to latch onto Aaron Connolly’s pass and dinked the ball over the advancing Martinez to snatch a huge three points for the Seagulls.